The Accurate Reloading Forums
Jedediah Smith
This topic can be found at:
http://forums.accuratereloading.com/eve/forums/a/tpc/f/4521043/m/2521084362
Jason P
Jedediah Smith
I just finished Jedediah Smith by Barton H. Barbour yesterday. It was a good book and offered some good insight to early American exploration in the west. It certainly did not have the detail of Lewis and Clark but did offer some great experiences.

I had no idea that his life was relatively unknown for about 100 years, following his death. Finally, records of his experiences were put to paper and preserved. Still, many mysteries remain.
boom stick
http://www.mtmen.org/mtman/html/jsmith/index.html

Cougarz
No he didn't write down his travels with the detail that Lewis & Clark did but what a grand tour of the southwest and up into Oregon territory he took. I agree he does need to be better remembered as one of the great explorers of his time.

I did a book report in junior high school about him and even my teacher commented he had no idea Smith did as much as he did.

Jason P
I agree in that he does need to be better remembered.

I found it interesting hear about the 'Rendezvous' They were held in different locations
with the inclusion of Bear Lake (where I currently live). Additionally, one was held in
Cache Valley Utah. It was either held in the place I grew up, Hyrum or Cove. I am not sure
why they said it was one of those towns.

Another interesting fact is they found some interesting historical document (I believe it was a letter to or
from Jedediah Smith) about 20 years back that answered some questions about his life. Its amazing that there is
still information out there to hopefully be found.
Cougarz
Thank you sir for the info, I might have to pickup a copy of that book. The book I have on him has been out for a while. I can't remember who wrote it off the top of my head.

Smith was always on the ragged edge of survival crossing the deserts of the southwest. Horses died which left them on foot. I always wondered why when he returned he didn't plan better? I ran into something online a couple years back that might suggest a clue. It seems the trappers took it as a point of pride that they could always find water just by their skill so they didn't carry much extra.

We today might think it foolish but considering what they did over such a wide expanse of country they roamed with a very minimal amount of equipment I guess they had the right to feel pride in their abilities. Now a days we would think its the end of the world because our fancy Thermarest mattress sprung a leak!

Most rendezvous took place in the present state of Wyoming (my home state) and a couple in Utah as you say.

Have a merry Christmas!

Jason P
I also found it amazing what he (they) put themselves through. I realize that they had a drive for money first and foremost (my opinion) and exploration. However, that seems like a small reward for so big of a chance of death or serious injury. Even after the two Indian massacres that took most of his men, he still kept going. The guy was tougher than nails.
Use Enough Gun

quote:
I found it interesting hear about the 'Rendezvous' They were held in different locations
with the inclusion of Bear Lake

One of my neighbors growing up was Fred Gowans, a BYU history professor who, in one part, specialized in the history of the West, including the history surrounding the Mountain Men and Rendezvous. Here are a couple of his books from my library and a picture of the Rendezvous sites 1825-1840. I have participated in many Rendezvous and love to be a part of those historical re-creations through dress and weapons. Mr. Gowans does discuss Jedediah Smith on 16 different pages in Rocky Mountain Rendezvous and on 12 different pages in Mountain Man & Grizzly. Fred now lives in Wyoming, and both books can still be purchased on Amazon, although there are few copies. It appears that Rocky Mountain Rendezvous has been subsequently published with a different cover (and perhaps updated) since Fred signed the one that I have in 1991. Mountain Man & Grizzly appears to be published using the same cover. 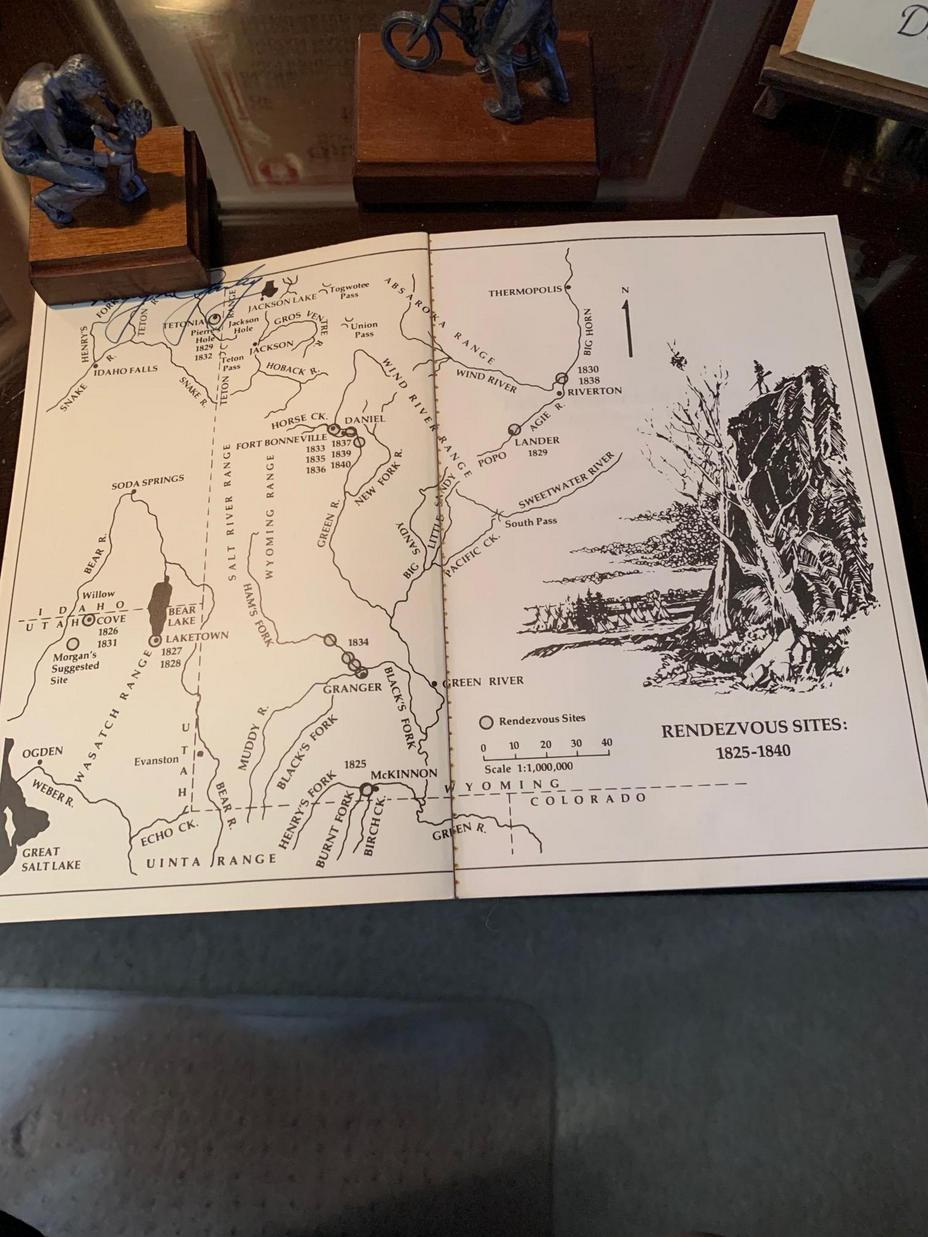 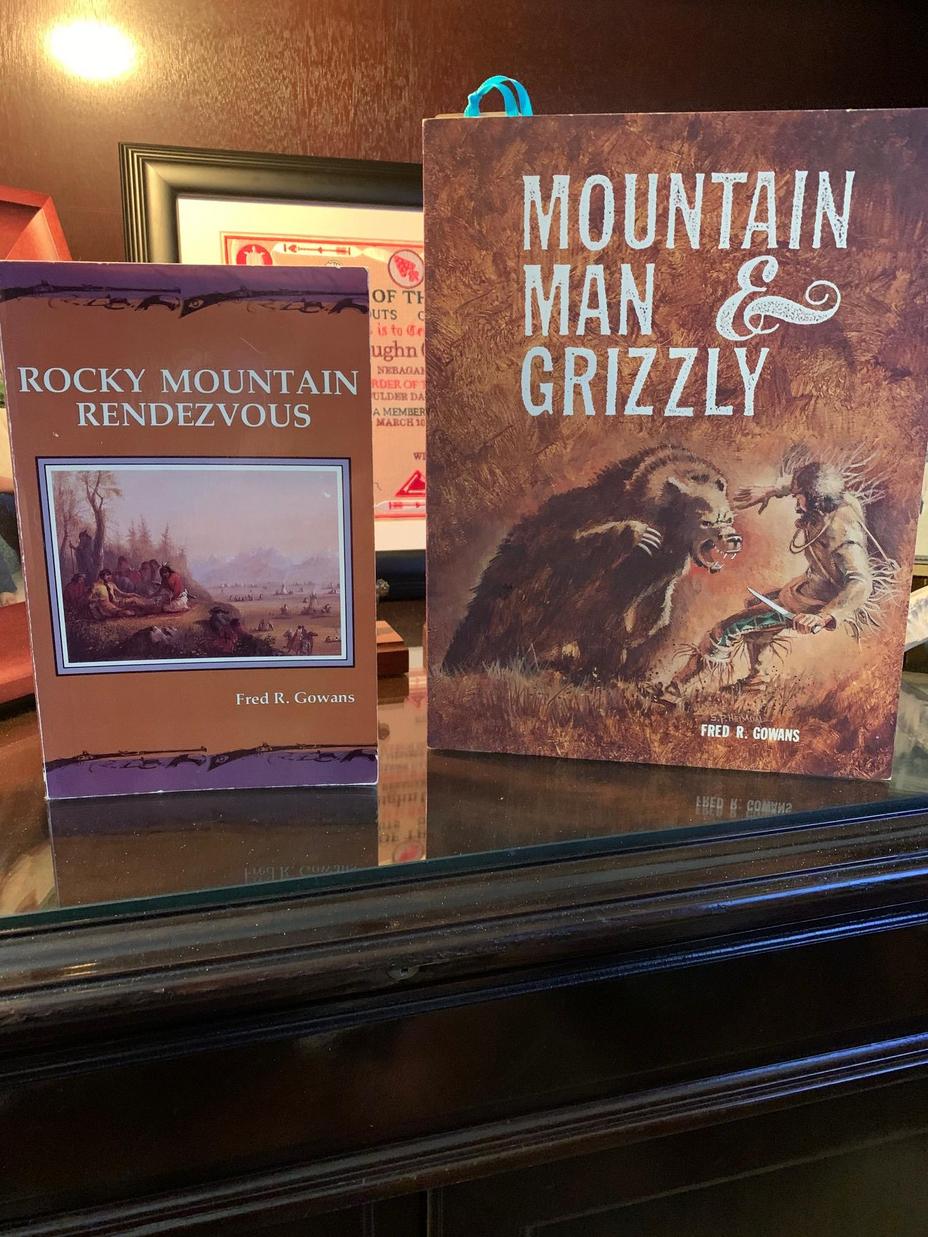 Thanks for the info on the books. I'll have to look into these also.

I've always thought trying to compare the motivations of people long ago is somewhat futile. Even the less adventurous folks then had far more ability to deal with hardships then we do know. Likely because it was just the reality of the time.

How many today would pack themselves and their family off into the relatively unknown west with little more than they could pack into a wagon. All for the promise of a better life. We today unfortunately have become very soft and risk averse. In many ways we have lost our pioneer spirit that made us strong.

quote:
We today unfortunately have become very soft and risk averse. In many ways we have lost our pioneer spirit that made us strong

Great posts from all, thanks
Bill/Oregon
His was an amazing life, and sadly a short one. His name is well known in Oregon, where I came from, partly for the massacre of his party at the mouth of the Umpqua River -- I have been to that site -- and for the Smith River and Jedediah Smith Redwoods State Park just over the border in Northern California. I often attended the Jedediah Smith Fur Trade Rendezvous back in my good old says of muzzleloading.
One of these days I hope to visit Wagon Bed Spring up near Ulysses, Kansas, where the Comanches killed him. Great American.

swaincreek
Thanks for the info, will get a copy. Love this section of the Forum !