The Accurate Reloading Forums
Best lube for a 1911?
This topic can be found at:
http://forums.accuratereloading.com/eve/forums/a/tpc/f/645100744/m/4991035652
Bill/Oregon
Best lube for a 1911?
I have been told the Kimbers in particular need to be lubed more than other makes. Mine is a Stainless LW.
It shipped with a sample of Shooter's Choice FP-10, which I have not used before. I was thinking of running a little Break Free CLP, but am always interested in a better product if there is one.

crbutler
I’ve been using break free CLP for years, including on a Kimber stainless target II 1911.

While there may well be better out there, the CLP has worked without issue and is cheap ( relatively).

Some guys I shoot with use synthetic motor oil and some use automotive automatic transmission fluid. It all seems to work...
p dog shooter
Any oil that says useful on guns/firearms.
dpcd
Use what the Army adopted for it; CLP.
Now for the first 100 years of it's life, you will have to research what small arms lubricant was in WW1, WW2, the 50s, before we got LSA and CLP.
Back then it was probably sperm oil.
(That is a joke, for those who can't tell. )
Oh, I see it is not a 1911, but an SS clone; get a lube that says it is good for stainless steel.
Fury01
The Key to Stainless 1911's is to keep them Wet. Galling is what you fighting. I used CLP and synthetic grease on places it benefits like frame rails and shot an old AMT Hardballer, Known to Gall, many thousands of rounds. My son is still shooting it. I did crack the barrel by having a squib while firing qualification with others shooting at the same time, doing a tap and rack then sending two bullets down range to the target at about 200 fps. I saw them hit the target. Frame and slide unharmed. Original barrel tossed and dropped an old Colt Govt model in it.


"The liberty enjoyed by the people of these states of worshiping Almighty God agreeably to their conscience, is not only among the choicest of their blessings, but also of their rights."
~George Washington - 1789

quote:
Originally posted by dpcd:
Use what the Army adopted for it; CLP.
Now for the first 100 years of it's life, you will have to research what small arms lubricant was in WW1, WW2, the 50s, before we got LSA and CLP.
Back then it was probably sperm oil.
(That is a joke, for those who can't tell. )
Oh, I see it is not a 1911, but an SS clone; get a lube that says it is good for stainless steel.

Which also might explain the condition of so many


Anyone who claims the 30-06 is ineffective has either not tried one, or is unwittingly commenting on their own marksmanship
Phil Shoemaker
Alaska Master guide
CFII
NRA Benefactor www.grizzlyskinsofalaska.com

Bill/Oregon
Carefully applied the FP-10 and put 100 rounds through it today. Ran flawlessly. Ask me 1,000 rounds from now. Boy, this pistol is tight. The barrel bushing should wear in, but I hope the slide stop gets easier to disengage and remove and replace.

Hogbreath
The best lube I have ever found is MilComm 25 TWB
Smooths everything out just nicely.

quote:
Originally posted by dpcd:
Use what the Army adopted for it; CLP.
Now for the first 100 years of it's life, you will have to research what small arms lubricant was in WW1, WW2, the 50s, before we got LSA and CLP.
Back then it was probably sperm oil.
(That is a joke, for those who can't tell. )
Oh, I see it is not a 1911, but an SS clone; get a lube that says it is good for stainless steel.

Which also might explain the condition of so many


"The liberty enjoyed by the people of these states of worshiping Almighty God agreeably to their conscience, is not only among the choicest of their blessings, but also of their rights."
~George Washington - 1789

Cougarz
Bill hopefully what you are using will work. Stainless auto's can often be problematic until well broken in.

I've always used CLP on my Colt Combat Elite without problems but it has a carbon steel slide with a stainless frame.

Mark
I wouldn't say I have a favorite, but I've found nothing wrong with ATF either in stainless or steel guns. Main thing is my opinion is to make certain it has lubricant on it. It's probably more obvious in protectants than lubricants but someone will buy a pricey one and then think that it only needs to be applied and monitored once a year and I suspect a percentage of gun owners do that with the lubricant side too.

NormanConquest
I am still a firm believer in Singer sewing machine oil. I 1st became enamoured with it for hunting up north. Degreasing the bolt interior + using the Singer oil (it won't freeze or congeal). That was important. Although we don't get those temps here I still find it my 1st choice for a slick gun oil.

Life is tough... It's even tougher when you're stupid... John Wayne

Wilson Combat® Ultima-Lube II is a blend of petroleum and synthetic lubricants specially formulated to insure optimal performance of any firearm and inhibit wear.

Wilson Combat® Ultima-Lube II is a blend of petroleum and synthetic lubricants specially formulated to insure optimal performance of any firearm and inhibit wear. The unique blend of lubricating fluids has proven ideal for today's high-tech semi-auto weapons, whether manufactured of conventional steels, aluminum alloys or stainless steel. In addition, we have found nothing superior to Ultima-Lube II for the proper lubrication and protection of the hand-fit custom firearms that Wilson Combat® is known for.

Ultima-Lube II Grease - Ideal for heavy wear areas. Stays put under extreme conditions, 40° to 350° F temperature range. Recommended Uses: Full and Semi-Auto rifles and carbines, Optimal in AR style rifles at temperatures above 50° F.
Peter
I have used RIG for the last 30 years or so on my target and race guns. Most production 1911's do not require much lube as there is just not that much metal to metal contact!!!
I also use RIG on my O/U shotguns.
Peter.

tanks
For my 2011s I use brake cleaner (non-carcinogenic) to clean them then I use food grade light machinery oil. A tub will last you a lifetime. I put 50-60K rounds a year down range and this seems to work for these firearms. 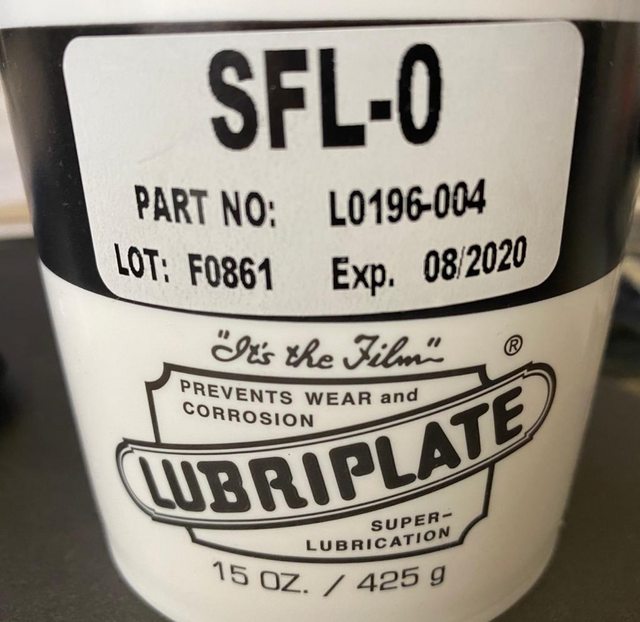 NormanConquest
Lubriplate is good stuff. I use it on all the bearings on my machinery.

Zephyr
Pretty much what ever you have in your cabinet.....
I break it up into lubricants that will or will not migrate. I'll lightly oil innards and use very sparingly a grease for the rails. As mentioned earlier steel 911's are not very fussy but I have heard or Stainless galling. I shoot year round in Vermont when the Temps drop into the single digits Temp Sensitive Oils will shut a semi auto down.
jeffeosso
someone should try finish line dry .. i may stick on my LCPs and see how she does -

this stuff has excellent properties on a bike -- though, tbh, it's something of a hassle to clean the chain "normally" .. which is why i have a bucket of gas to just through the parts in, swish them around, and then back one the bike

Snowwolfe
A couple of years ago bought a quart of Mobil 1 synthetic automatic transmission fluid. Have used it on every thing and been very pleased. The quart should last at least 40 years.


My biggest fear is when I die my wife will sell my guns for what I told her they cost.

Dutch44
I've been using Nano-lube in 5w and 10w. Everything from stuck die threads to lubing actions. Never failed me yet. A little expensive but worth the money and effort.
Use Enough Gun
Some great suggestions on here. I own a stable of Kimbers, mostly in 45 ACP. Thanks for the suggestions.
hacksawtom
Beats me. I've been using LSA (lubricant small arms) since Vietnam. No jams or problems there. 35 years carrying 1911's and again no problem. Is there anything better, probably, however I don't argue with success!

packrattusnongratus
I don't know about better but I have been using Mobil 1 for years and one of those 1911s is a Springfield Armory 5" stainless from 1994. Jeffeoso I have some of that lube, the dry version. But we get so much humidity I would be better off using it on the guns. Be Well, Packy.
Ongwe
I think it's more important that you use something, than what you use.

I use a stainless grease on the rails and a drop of ATF on the barrel and anything that rotates.

The old saying, "If it slides, grease it, if it turns, oil it" has always worked pretty well for me.
NormanConquest
Good words to live by but I must confess that bearings on my machinery need Lubriplate more than oil.

Singleshotlover
I've been using LSA for years,use the medium formulation. Use it on my bolt guns, 22's, pump shotguns. Used to buy the CLP in quart bottles. That was when I used to shoot steel plate matches.
Frank
LeonKomkov
My Kimber intially was very tight, and misfed sporadically. An experienced IPSC shooter I was training with at the time recommended Gun Juice to me, and I've used it ever since with great success. That being said, I don't have any idea if Gun Juice is superior to any of the other suggested products. It may be coincidental that the misfeed issues stopped around the time that I started using it. But, as they say, if it ain't broke, don't fix it. So I have used it ever since on all my 1911's.
SlamFire 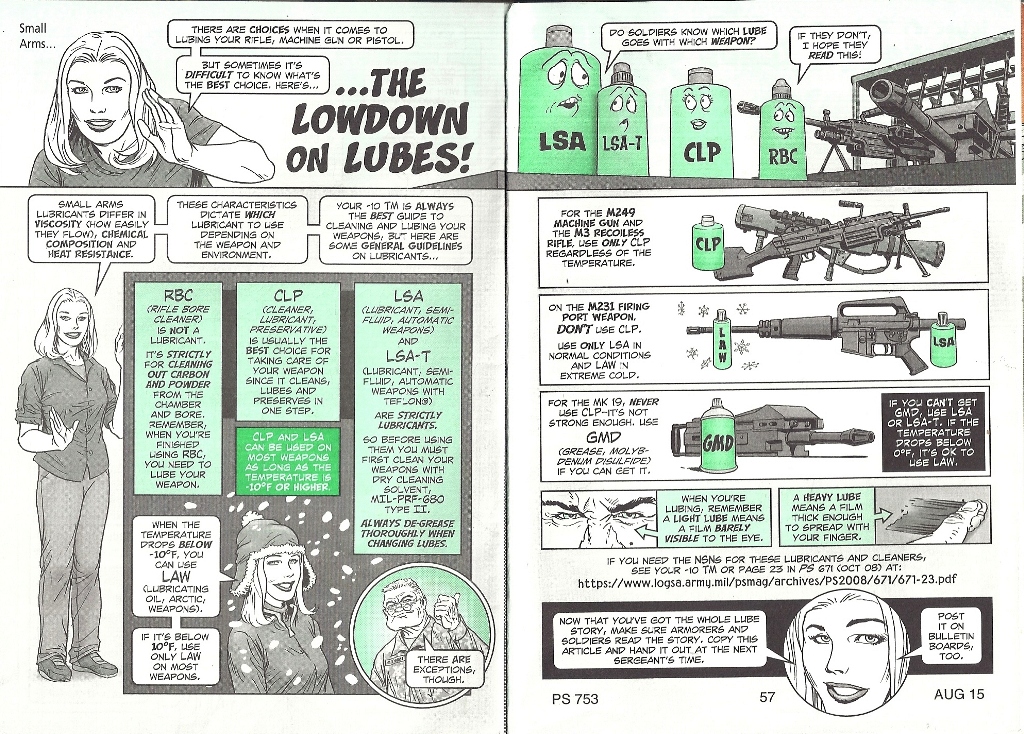 I have been using LSA on my Bullseye pistol M1911's and am very positive about the lubrication. LSA is a semi fluid grease, it sticks to the surface better than straight oils.

Still, all lubricants need to be reapplied as the firearm is shot, as pistols don't have oil pumps and oil sumps.
NormanConquest
Be worth giving it a try. Although not a 1911, although I use it on mine. I use Singer sewing machine oil on the springs + internals on my bolt rifles also as It will not freeze; an important feature in hunting in freezing temps., actually for the function of any piece.

Atkinson
Ive read and been told that SS due to galling requires special substances for lubrication, Not sure how accurate that is? but I don't have anything in SS so havn't delt with the problem if it is one..

Grenadier
I use CLP. It's really slick because it contains Teflon. The Teflon settles to the bottom of the bottle so be sure to shake it up vigorously before use.

i bought fp-10 on amazon pretty cheap. also bought tw-25. dan wesson said to use both.

On one of the guns I am going to use

i am invested in the petrochemical space for decades - most of real r&d is done for ice (internal combustion engines) and sealed systems (electric, compressors, industrial) ect.

guns are simple compared to most other systems in lubrication needs.

arkypete
In my shooting bag I have small bottle of FP-10 and a squeeze tube of graphite. These seem to fill the bill for most any lube issue.


eamyrick
I used to run our armory of 25 Springfields and I had great success with MilComm. The hard part was getting them to run reliably on reputable defensive HP ammo.