The Accurate Reloading Forums
Getting screwed by GM
This topic can be found at:
http://forums.accuratereloading.com/eve/forums/a/tpc/f/3611043/m/6541054262
TWL
Getting screwed by GM
The front passenger airbag sensor in my brand new 2020 Tahoe has malfunctioned. It doesn't register when someone is sitting in the seat and therefore will not activate the airbag in the event of a collision. Pretty serious safety issue, right?

Service manager at local dealer tells me the part in question is "out of stock" THROUGHOUT THE ENTIRE GM SYSTEM IN NORTH AMERICA. He can't tell me when he'll get the part.

As of yesterday, my Tahoe has been sitting in the dealer's lot for a month. There is absolutely no indication as to when the part will become available.

They gave me a loaner vehicle the day I left my Tahoe, but only after I demanded one. Had I not made an issue of a loaner, they would have been content to leave me standing, literally, on the street with no vehicle. The loaner, btw, is some tiny sub-compact vehicle that would fit inside my Tahoe.

What utter BS. Very, very hard to believe they don't have such a critical safety component in inventory anywhere in their system.

In the meantime my vehicle sits at the dealer and no one can tell me when it will get fixed.

Not really as long as the passenger buckles up

But I agree with you that it is nuts they can not get the part
Kensco
TWL, I've sent you a private message.
TCLouis
All of the manufacturers have regional reps that can help solve problems with dealers.
It used to be somewhat difficult to get in touch with them, but they were typically very effective when they got involved.
I'm guessing the contact has been sent to you via PM.

TomP
Dealers supposedly make more money from service than from selling new cars, you'd think they'd do better. On the other hand, if there's a systemic problem, the makers might have a production line sized for new production and swamped when replacements are added before their planned end-of-life.

Our country, right or wrong. When right, to be kept right, when wrong to be put right.

NormanConquest
I had a mechanic buddy who worked at the dealership + said that the ongoing "joke" there was they called the parts dept. the part dept. ( the s is on backorder)

Spoke directly with the GM of the dealer yesterday. Walked directly into his office without notice. Broke up a staff mtg. Explained my problem in very, very clear terms. I'm sure I embarrassed him in front of his staff.

To be fair, he could not have been more gracious.

Today he handed me the keys to a new 2021 Yukon Denali with 50 miles and said it was mine "until we sort this mess out".

Gotta give 'em their props.

But....it's clear there's a problem somewhere in GM, and somewhere in the their service/repair/customer service system/culture.

How can it be that a dealer cannot find a part, especially a so-called "critical safety component" anywhere in their corporate system?

Props to the GM of my dealer, but I'm still calling BS on the system.

quote:
Originally posted by TWL:
The front passenger airbag sensor in my brand new 2020 Tahoe has malfunctioned. It doesn't register when someone is sitting in the seat and therefore will not activate the airbag in the event of a collision. Pretty serious safety issue, right?.

Could be worse. GM had not replaced a single Takata air bag inflator. A web search shows another person has been killed when one of the inflators blew up, in a Honda accident, 20 August in Mesa Arizona. https://news.yahoo.com/takata-...-know-201253740.html The Takata inflator goes unstable with time, and there are millions of GM vehicles fitted with these things, but GM has decided to delay replacement by fighting the issue in court. This reduces the total cost if replacement is eventually mandated, as vehicles wear out and therefore the number of airbags replacements goes down.

But also as time goes on, these inflators are aging and growing more unstable with time, so the death risk to the driver and occupants actually goes up, because behind the dash is a bomb.

Never believe a thing these companies say. They lie without guilt or shame. Corporations will not admit fault for anything, they will come up with plausible sounding excuses why their problems are due to some one, or something beyond their control. Give it time and they will be blaming China or the monsoons over Thailand. And, understand you can only have a master/slave relationship with a corporation. And as you are the much smaller and weaker of the two, you are the slave.

Model Corporations as human psychopaths and their behaviors become understandable and predictable. Psychopaths are now creatures, they exist in the now, devil take tomorrow. You can only have a master/slave relationship with one. They know if you are negotiating, you are weak. Everybody and everything is disposable in the attainment of their goals. It turns out they are highly manipulative. They lie without guilt or shame, they don't have a sense of shame, but they learn to act as if they have compassion, empathy. But they don't. They don't care about the destruction their actions cause others. They are grandiose, they really believe they are the smartest, the best, the center of the universe. Psychopaths are fearless, they don't have a good sense of risk. They are easily bored, they crave chaos and the excitement it creates. If things are too boring, they will stir up trouble and sit back and watch the world burn, for their amusement.

You situation is this, GM has made its profit off you. It is not going to reduce future profit by taking a bag off the production line when they have just enough bags for the vehicles they are producing. You have no negotiating power, all you can do is nag. You are powerless.

GM does not care if some dies in your vehicle, and the chance of that is remote. Their best case accident situation is that you, the driver, and your passenger both are killed in an accident, which eliminates future legal risk considerably. Based on costs, I believe that by kicking the can down the road, GM is following the path of lowest cost and least risk. And you have no other option but to grovel before the corporation and suffer what you must.
Use Enough Gun
I grew up in a family where all of our vehicles were GM, especially Chevrolet. After marrying and owning a number of GM vehicles (including two brand new suburbans that ended up having a stack of repair orders on each of them approximately 4 inches deep each), I got sick of it and switched to Ford vehicles and trucks. I have never looked back, and for me, I am happy that I made the change.

NormanConquest
I had a buddy 50 years ago that swore by Fords for the simple reason that they NEVER left him on the side of the road. I can't say the same for all the chevy's I've owned.

quote:
Originally posted by NormanConquest:
I had a buddy 50 years ago that swore by Fords for the simple reason that they NEVER left him on the side of the road. I can't say the same for all the chevy's I've owned.

Technology has stood still for the last 50 years.T American manufacturers had to improve their quality because when consumers purchased cheap, fuel efficient Japanese vehicles, that ran forever, GM almost went broke, Chrysler did go broke, and Ford was on the ropes. The American automotive industry lost a generation of buyers. I remember that GM sold a Nova branded Toyota Corolla, and they had to sell the car at a discount. At the same time, the same Corolla was selling so well at the Toyota dealership, they were attaching "ADP", additional dealership profit, to the price tag.

Look at Consumer Reports ratings. American vehicles have improved in reliably. So have the Japanese. Vehicle manufacturers buy each other's vehicles and reverse engineer them. I heard in a meeting, the presenter claimed all the American auto companies had outsourced their design work to just a few contractors. Everyone in the building had signed non disclosure agreements, but the overall effect is a normalizing of design approaches. The brand is more or less unimportant over time, one will be doing better than the other. But one gets behind, if they don't catch up, they will be as gone as Studebaker is.

A couple of years ago I went to the Corvette plant in Bowling Green. Compared to what I saw in the early 1980's, the computer technology is unbelievable.

When I got to the end of the GM Arlington assembly line, early 1980's, seven guys were pushing a car off to the side because it would not start. There was line of cars waiting for mechanics to figure out why they would not turn over.

At Bowling Green, no one knew of, or remembered a car that did not start. At the end of the production line was a 40 foot by 20 foot screen (guessed dimensions) and the car was undergoing hundreds of thousands computer checks, through a connection in the wiring harness.

There was a lot more technology before I got to the end of the production line.

Making decisions on what to buy now, based on brand experiences during the Eisenhower era, is so uninformed. 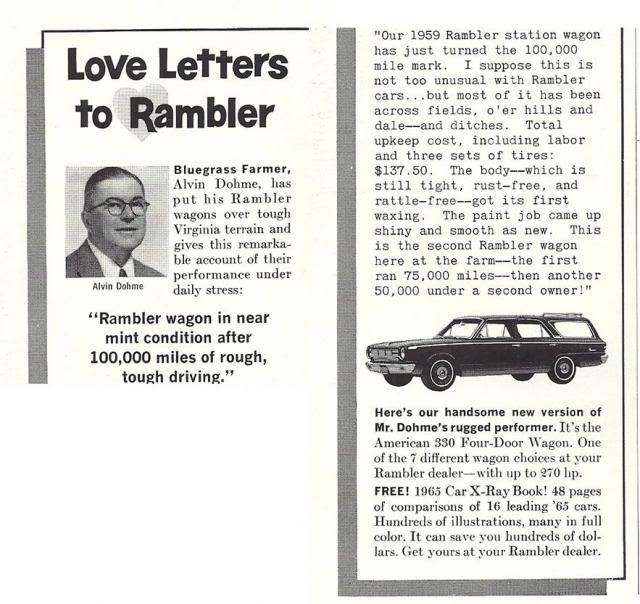 Frostbit
Most reliable vehicles I have ever owned..... 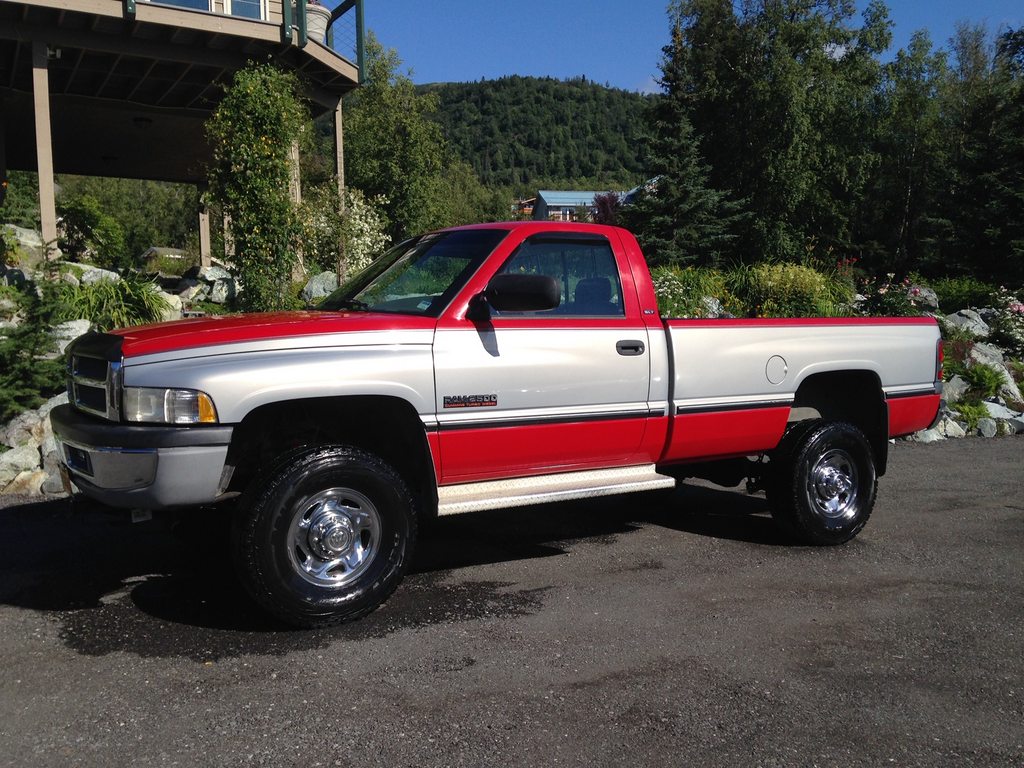 Jason P
Switched to ford several years back and they have treated me great. If I bought a new truck, I would most likely just stick to the 6.7 Ford.

Grew up driving GM vehicles. Hope you get your issues straightened out.
Kensco
I was a Chrysler fan back in the muscle car days (the 60s); Plymouth to be specific. I gravitated to Ford. Loved their tenacity and refusal to follow Chevrolet into bankruptcy during the financial crises. Invested heavily in "F" when it hit less than $2.00 a share. Loved their CEO, Alan Mulally.

Since probably 1978 every company I worked for ran Fords in their fleet; LTDs, Taurus's, Broncos, Explorers. When I retired I told myself I deserved a new Audi. Instead I bought a used Ford Edge and another rental property. The Edge has 105,000 miles on it now. I'll never switch.