Anyone had a look at reloading the 44 mag with the 225 gr Hornady Flex tip?

Hodgdon provide rifle data for the .44 mag in a rifle which is helpful but something looks odd.

For the 225 gr flex tip, you seem to only be able to load ~85% of the max load of the same weight Speer bullet and so much less than the Sierra 210gr JHC. 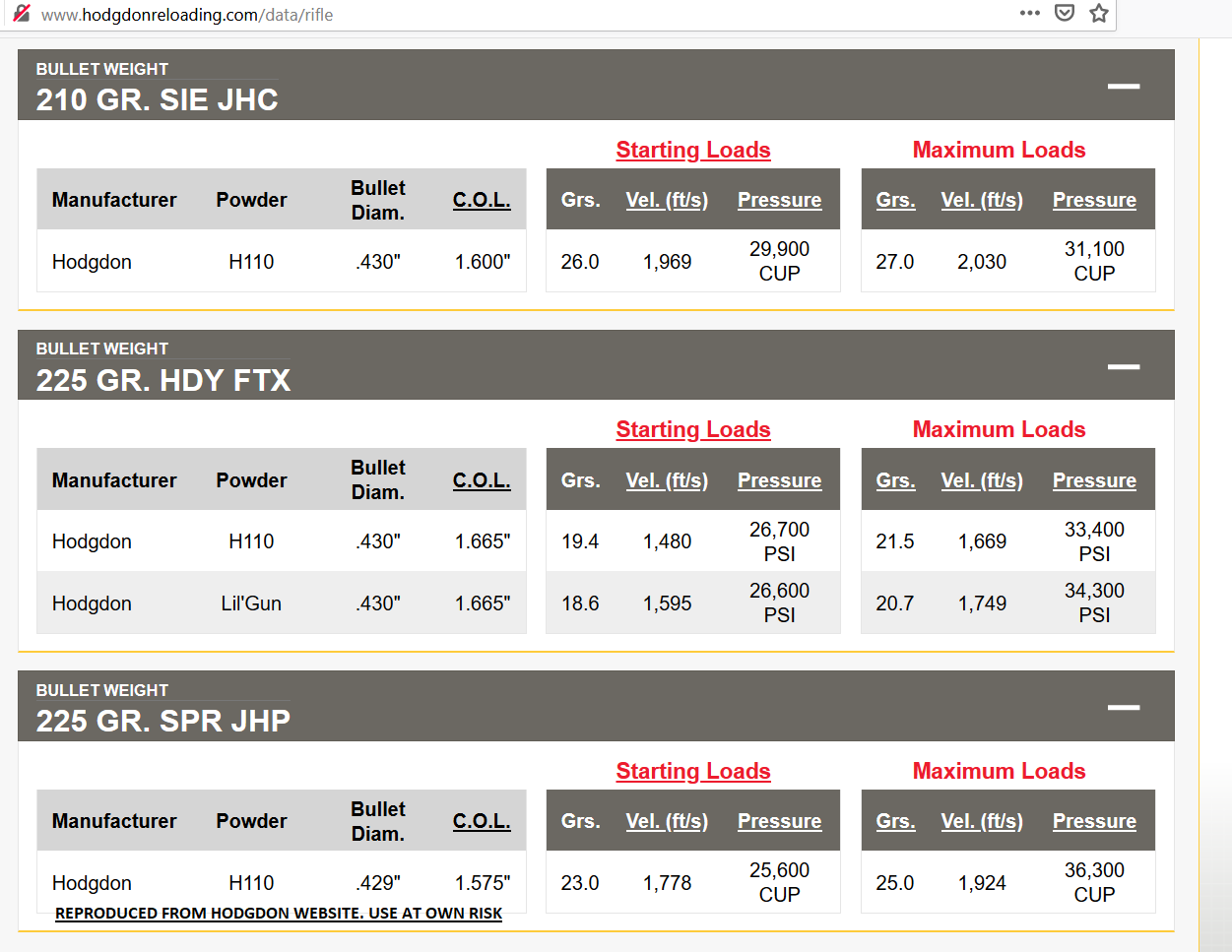 farbedo
It's because of the long tip forcing them to place the crimping groove forward on the bullet compared to standard soft points or JHP's.

It's been a while, but I don't think you can get more than 23-24 grains in the case under the FTX.

quote:
Originally posted by farbedo:
It's because of the long tip forcing them to place the crimping groove forward on the bullet compared to standard soft points or JHP's.

It's been a while, but I don't think you can get more than 23-24 grains in the case under the FTX.

Cheers Jeremy, thanks for that!
Lamar
they could also be using the shorter FTX cases.
Hornady's work around to the longer tip was to shorten the cases... all of them, not just the 44 mag ones.
vlwtx348
Not all of them, but most of them.

Wait just a minute....some drunk will be along to tell you that your post count is not high enough for you to have an opinion.

44magLeo
From looking at the load data for the 44FTX bullet I can't see any reason for it. The standard 240 gr bullet loads to a higher velocity and has a much better BC.
The 200 gr XTP has a better BC and can be driven much faster.
Either one has more energy and will shoot flatter across the range than the FXT bullet.
In the pistol cases the FXT is just a gimmick to sell more ammo.
In the bottleneck cases it does better. The 30-30 will shoot the 160 gr FTX to about the same velocity as the 150 and 170 gr RNs but the BC is much higher, this gives you more energy and flatter shooting.
The other are about the same.
Check your data on these bullets vs others. You will see.
Leo


The only way to know if you can do a thing is to do it.

Atkinson
I base very little on energy stats, they are basically worthless....Bullet weight and shape and velocity are a better comparison as to bullet flight, trajectory, penetration,expansion to create killing effect, that comes about other than energy. Its just that you can create massive amounts of energy with a phonograph needle at 5000 FPS..