quote:
Originally posted by vicvanb:
I'm surprised that no one has mentioned Ken Carlson. Bob Kuhn and Ken Carlson are considered to be among America's best--ever. They are painters, not illustrators. Ken is still very much alive and painting every day. Kuhn died several years ago. I've had the pleasure of knowing both of them and own several of their works.

I saw some of Carlson's work online and I liked it.It does not come across as fake or trying to make something look like a photograph.What do you mean by painting compared to illustrating?
Carlson's is the type I like.
vicvanb

quote:
Originally posted by shootaway:
What do you mean by painting compared to illustrating?


The illustrators strive to make their paintings as realistic as a photo--in some cases every hair or feather is drawn. Carl Brenders is a good example. The painters paint with a broad brush and from a distance the result looks realistic but close up the brush strokes are obvious and no hairs or feathers are evident. The painters' work more closely meets the definition of "fine art." And it is much, much harder to paint than it is to illustrate.
shootaway
Thanks.
SBT
I am fortunate enough to own a Ken Carlson charcoal of a jaguar. It is great.

I want to buy a John Seerey-Lester print.


"There are worse memorials to a life well-lived than a pair of elephant tusks." Robert Ruark

mboga biga bwana
...and she is also very talented http://prihodajudit.hu/en/paintings


Use Enough Gun
Another that I like is Linda Lemon.

Manyathelo
Peter Stewart from Peter Stewart Fine Art, an incredible artist
Phil Soucy
My personal favorite would have to be Brenders.
Bvekenya
Dino Paravano always stood out as one of better one for me....

http://www.heritageonlinegalle...avano-HotPursuit.jpg
Poyntman
I own several different artists works, but must say I'm surprised almost i didn't see Seerey Lester listed more ( SBT mentioned just above)
I love how he ( and his wife Suzy too) compose the wildlife and place them in context with historical scenes and imagination. I own just three of his works and really would like about 10 more if I could.
I met with him in his studio last year near my house and he explained the thought process and can even place you or certain personal details in his paintings for you. I believe he mentored Banovich some back in the day (who's work i like very much and own too)

Some of these artists listed here are the true professionals and most others are simply amateurs by comparison... I only wish I had more wall space and money.
275RIGBY
For wildlife art:
C. Rungius, B. Kuhn, J. J. Audubon

quote:
Originally posted by Thierry Labat:
Craig Bone and Andrew Bone are excellent. Check them out!!
Also a lady who is not well known, but is excellent at paintings is Lisa Masterson. She actually did a beautiful painting of a leopard taken by a trail camera and is currently doing a painting of a Lord Derby Eland for me. She is Zimbabwean as are Craig and Andrew.

bwanamrm
John Tolmay is a good friend and a wonderfully gifted sculptor. He is a bit of a raconteur as well and can tell a hell of a good story! Had dinner with he and Bwanajay this past Wednesday in Rockport. Good fun...

And Brian Jarvi and Daniel Smith aren't bad either!

hunteratheart
My Daughter! Still a work in progress. The Elephant and leopard are done. I gave her a piece of my tanned buffalo back skin and asked her to do the Big 5 in grayscale. I plan on putting this on the back of my buff table pedestal. Will be stunning when done. Proud papa with a gifted daughter.

BNagel
David Shepherd (but he don't like you much).

Abbey Walmsley is next.

Idaho Sharpshooter
My Nikon DSLR. Because I get to be there when the wildlife is photographed...
Lizzy
[QUOTE]Originally posted by Lizzy:
Craig Bone

There are many gifted Zimbabwean artists.
Lizzy
Craig Bone

There are many gifted Zimbabwean artists.[/QUOTE]
Lizzy
David Shepherd

I saw his original painting of the elephant hanging in the house of an ex-hunter,whom I nursed.

http://shop.davidshepherd.org/davidshepherd/
Idaho Sharpshooter
went to the website, just wow!!
Lizzy
Shepherd is incredible but so is Craig Bone and Paul Bosman.

And Michael North who does photography.

He does safari's with a camera and I would like to join him on a safari.
Lizzy
beautiful elephants photo's by Michael North

I saw his original painting of the elephant hanging in the house of an ex-hunter,whom I nursed.

He was from a country where they still pour gasoline on recalcitrant married women and light them, and stone any women who is raped to death to restore her family's honor.
vashper
In Russia - Vadim Gorbatov. 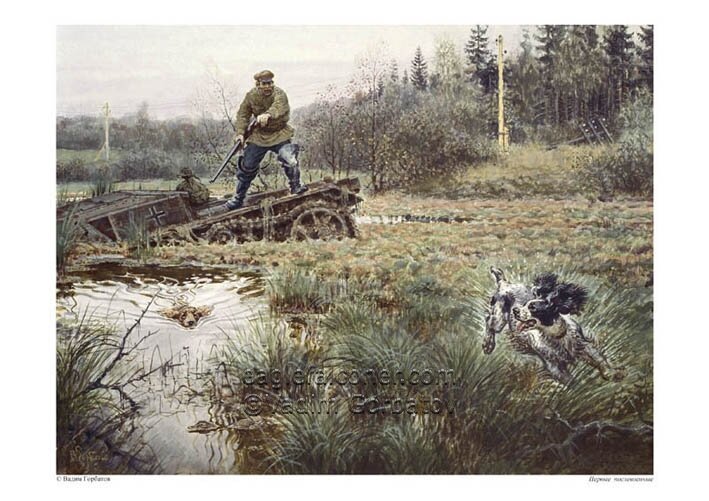 Nice painting(aside from the tank) vashper.I am sure there is a history of good hunting in Russia.One day I will take the trans Siberian train and see Russia.
BEGNO
I have "Big Ivory" and "Headdress" by John Banovich and love them both. They are in my den and I get a lot of admiring comments from visitors.

C'est Tout Bon
(It is all good)

Zephyr
+1 for David Shepard
srtrax
One of my favorites,
http://www.janmartinmcguire.com/Giclees1.html


MJines
Just to second some of the other comments, another name to consider is John Seerey-Lester. I find his work really interesting. It is more than just a painting (although John is an incredible painter), it is a story. At the SCI Houston banquet on Friday I bought a giclee of his painting Death in the Grass. You see the lion, but you have to look a little closer to see the hunters. The hunters were Denys Finch Hatton and Prince Edward.

John's books are great too since you get the story with each piece. It is wildlife art with a bit of a kick. Neat stuff.

"Determined to reach Fort Portal at the base of the fabled “Mountains of the Moon” in Western Uganda, the footsore safari pressed on. Their guide was Uganda’s chief game warden, Samaki Salmon, who had confidently told his royal hunting party that it would be a simple trek in the relatively cool air, and that they would be in camp before nightfall. This was not to be the case.

The year is 1930 and His Royal Highness, Edward, Prince of Wales, was making his second visit to East Africa. Scandalized by his abdication of the British Throne and his love affair with Wallace Simpson, he was nonetheless an avid outdoorsman and respected hunter. On both his visits to Africa, he has impressed his white hunter, The Honorable Denys Finch Hatton (made famous through Isak Dinesen’s “Out of Africa”). Finch Hatton was perhaps chosen to lead the Prince’s safari because he was an Old Etonian and had the right British accent and social breeding.

However, Finch Hatton was skeptical from the outset that the party could complete the trek in one day. Perhaps the Prince also had his doubts, because he gave his bearer a bottle of whiskey to put in his rucksack and bring along just in case. Salmon said there would be no need to bring along whiskey as there would be plenty at Fort Portal.

The Prince ignored the reassurances and took it along anyway. He was determined to see the view he’d been told about from the top of the Bondibugyo Escarpment. The party trudged on as the weather took a turn for the worse. It was now getting very cold and it had started to rain. The fine misty rain didn’t faze the Prince, it probably reminded him of the Scottish highlands; gleefully he pressed on through the tall grass.

Then, to the astonishment of them all, Salmon the guide, announced that he was lost! It was now going dark and they were totally unprepared for the conditions. They had no tent, no shelter, no blankets and were now looking at the ordeal of spending a long night at over 5,000 feet in the rain and cold. The bearers cleared a small circle in the grass and the party sat on the ground with their backs to each other. They were grateful to see the prince’s bottle of whiskey and listen to his interesting tales from Patterson’s Man Eaters of Tsavo. To add to their discomfort, a nearby lion could be heard roaring over and over again all night. A somewhat fitting backdrop to the Prince’s stories. Obviously no one slept, and it was a night to remember.

In my painting Finch Hatton leads the way with the Prince behind him, just before they call it a day and succumb to the elements, lost in the grass."

Lizzy
Anyone who knows elephants cannot be afraid of them. They are very intelligent and are only dangerous if one cross their boundary.
The painting is great but it is set in 1930.
If you want to live dangerous, join the army and hunt down terrorists in the Middle East, ISIS for instance. That is dangerous.
Lizzy

quote:
Originally posted by srtrax:
One of my favorites,
http://www.janmartinmcguire.com/Giclees1.html