The Accurate Reloading Forums
Suggestions Please
This topic can be found at:
http://forums.accuratereloading.com/eve/forums/a/tpc/f/6511043/m/3021097262
Michael Michalski
Suggestions Please
I'm getting so old (80) that most of my centerfire rifles are leaving home. I think a decent air rifle just might work for target shooting. Any ideas for me to consider? No hand pumping or break guns please. I don't want to sell the farm but don't object to reasonable priced good equipment.

Saeed
Get a compressed air rifle.

Far too many to tell you which make.

I suggest you go to a place that sells them, and try different makes and models.

You will find one to your liking.

I personally do not like the bullpub models at all.

I find them awkward.

Depends on what you wish to do with it, generally, the larger the caliber, the less shots you will get with a fill.

For purely target and small birds, a dedicated target rifle will be great.

The tank lasts forever, and they are EXTREMELY accurate.

I said small birds, I regularly shoot crows with mine, despite the lack of power.

I use head shots, which are not difficult at all, given they accuracy.

Talking of accuracy, the kids use them to shoot pellets into empty 22 rimfire MOUTHS!

These guns are made for 10 meters shooting.

I have killed crows at over 70 meters with it.

quote:
Originally posted by Michael Michalski:
I'm getting so old (80) that most of my centerfire rifles are leaving home. I think a decent air rifle just might work for target shooting. Any ideas for me to consider? No hand pumping or break guns please. I don't want to sell the farm but don't object to reasonable priced good equipment.

If you don't want to bother with pumping up tanks. If you hate the idea of a break barrel like I do. Go with a lever gun, side or under lever.
I went with an Air Arms TX200. By far the nicest spring powered are rifle made in my opinion. I added a Vortex Diamondback Tactical 6-24x50 scope with BKL triple strap rings. 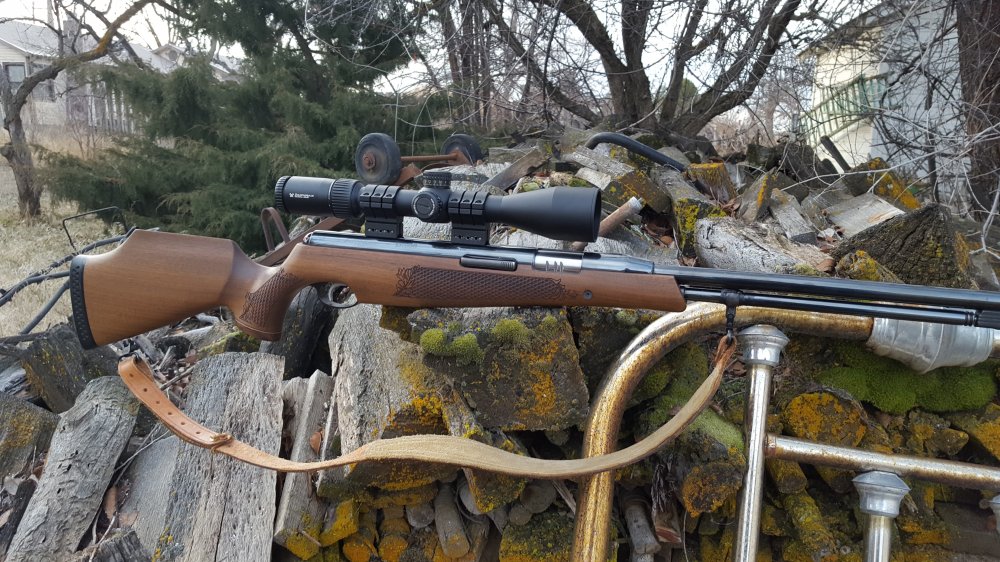 I have had mine for a few years now, I use it for varmint hunting. The farms I shoot for hire me to kill rock chucks in areas that are not suitable for hunting with powder burning guns.
I killed 80 rock chucks in this shed alone. 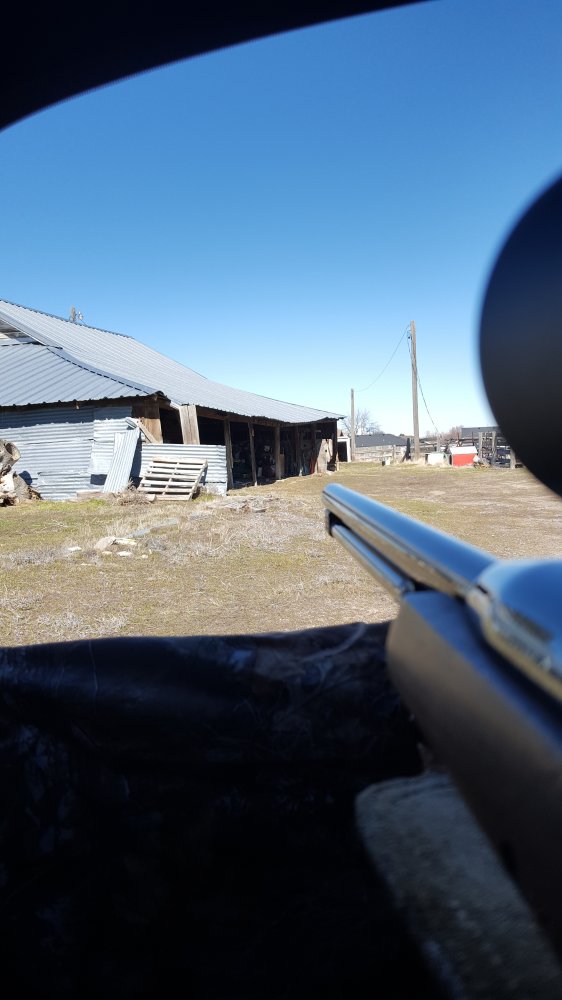 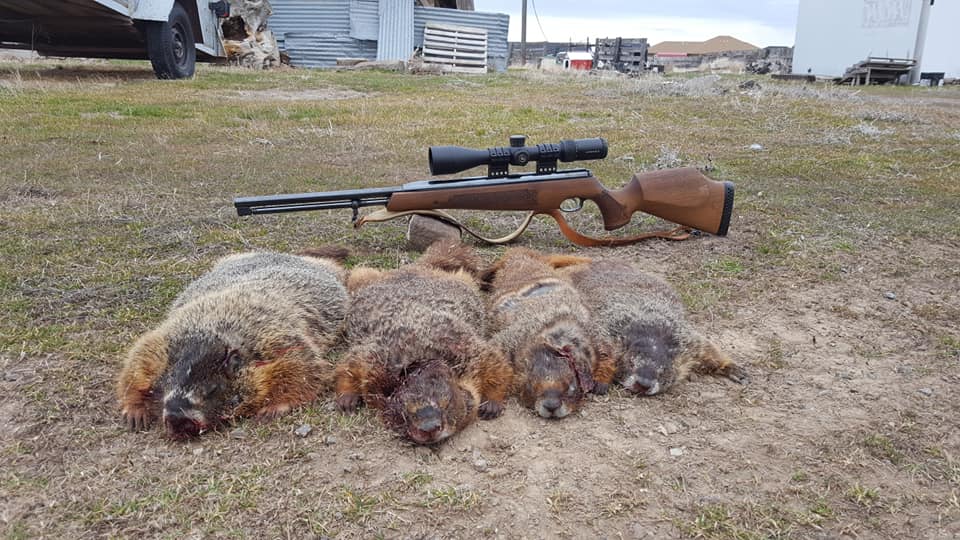 Plastic pipes are also a spot I kill lots of chucks. The Air Arms is so accurate I use eyes as a target. 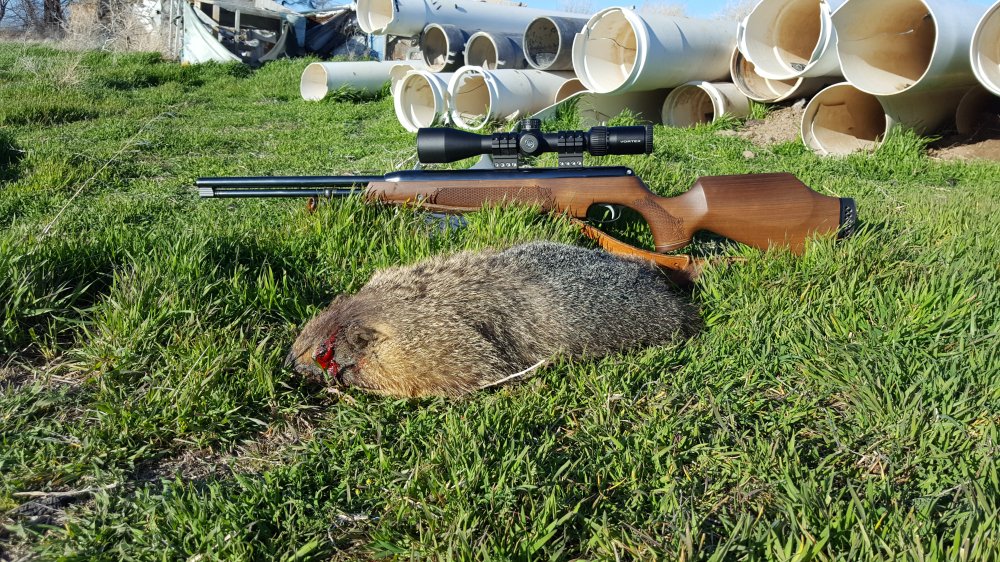 Just for target shooting the Air Arms is a great rifle. It is the winningest rifle in the springer class in field shooting in Europe. 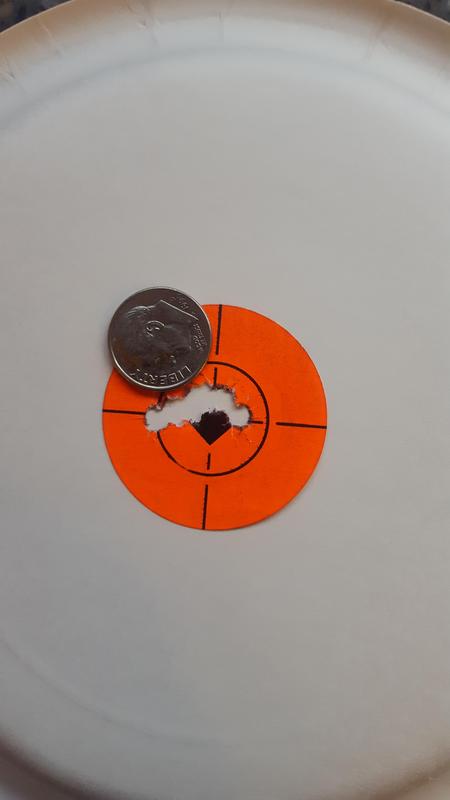 The Air Arms is not a cheap rifle. It is expensive but it is better to cry once when buying an air rifle. I bought several "adult" air guns that proved to be garbage. I bought several UTG products that proved to be garbage.
While the package I have is not cheap it is a life time rifle. It can be passed down for generations.
Don't expect blazing speeds out of an air arms. I get 664 FPS out of my 22 cal. It does very well killing big chucks out to 70 yards with brain shots.
Bill C.
Why not a break barrel? Simple, self contained, accurate, time proven design. I own all types of airguns and most times a break barrel springer is my go to rifle. They may seem foreign at first but are easy to adapt to.
Compressed air is great but be sure you understand the need for a high pressure pump or to have air tanks and a 4500psi fill source, and the difference in how a regulated and unregulated rifle shoots.
A lot depends on how much of an initial investment you want to make in a pellet gun. And for what you expect to use it
Idaho Ron
Break barrel guns have piss poor triggers and because the barrel moves they have poor accuracy.
Saeed

quote:
Originally posted by Bill C.:
Why not a break barrel? Simple, self contained, accurate, time proven design. I own all types of airguns and most times a break barrel springer is my go to rifle. They may seem foreign at first but are easy to adapt to.
Compressed air is great but be sure you understand the need for a high pressure pump or to have air tanks and a 4500psi fill source, and the difference in how a regulated and unregulated rifle shoots.
A lot depends on how much of an initial investment you want to make in a pellet gun. And for what you expect to use it

Break open guns are a world away from the current crop of compressed air rifles.

Like yourself, I have used practically everything that came along, all my life.

But these compressed air weapons are something else.

If one is serious about air rifles, these are the only ones to go for.

But, the outlay is quite high compared with a break open gun.

Depends on what one wishes to do really.

Here is an example, on something else.

I have several friends who have drones, and we take them out whenever we go somewhere.

After using theirs for a few minutes - battery life is never more than 30 minutes, max. - they have to put them away, as hardly anyone brings any spare batteries.

I get my full money's worth out of mine, as I hardly ever run out of batteries - my drone bag has 18 spare batteries, and I have a high power battery pack to charge the remote as I fly too.

Expensive, in comparison, but it sure makes it worthwhile in the long run.

carpetman1
I have an RWS 52 which is side lever. Takes a pretty hefty pull to cock it and the thing weighs 9 pounds. Probably not what you are looking for.
Bill C.
oh I have compresed air rifles up to .50 cal so I understand, but average powder burner shooters eyes glaze over when you try to explain dropping a grand or more on a pellet rifle. For a beginner to start with a pcp, add scope that costs as much as the rifle , tank, and compressor is more then the average shooter spends on their entire rifle collection in a life time. "poor triggers and because the barrel moves poor accuracy" is a common misconception. A good one like a tuned up R-1 or Pro Elite will be more accurate then most shooters can shoot them. I can easily get a record trigger under 10oz safely. most people don't know what a good trigger is untill they shoot an airgun
I just like the simplicity of spring guns. Want to have a little fun, shoot compressed air against rimfire shooters or bring a big bore down to the range where the fuds are checking their deer guns. A 405gr .458 launched by air instead of a 45/70 is a bit of a surprise to most.
Michael Michalski
Thanks all. You've given me a lot to ponder. Stand by for (dumb?) questions.

Jiri
Order new FX Crown MK II as I did.

quote:
Originally posted by Michael Michalski:
I'm getting so old (80) that most of my centerfire rifles are leaving home. I think a decent air rifle just might work for target shooting. Any ideas for me to consider? No hand pumping or break guns please. I don't want to sell the farm but don't object to reasonable priced good equipment.

I'm 75 and have an old Feinwerkbau 124 sporter. In it's day it was a premium sporter, a break barrel. Advertised as taking 19lbs of force to cock, much less than most, and launched pellets at about 1000fps. I have killed crows out to about 60 yards with it. Having not shot it for several years I pulled it out and it would not fire, the piston seal had dried or something so it is currently out for repair. My wife was saying get a new one, but this model on the used model is going for $750-900 nowdays, so a couple of hundred if that much for repair is reasonable. Accuracy, with a scope is better than I , age and nerves have caught up.

I would not dismiss a barrel cocker, other options are side levers and under levers, still have to cock. I do have a side cocking match rifle, but other than motion cocking is the same. The match rifle does not take as much effort as it is not designed to launch pellets as fast.

Other than those types, I think the only other good option is a PCP or pre charged pneumatic, which means a reservoir or tank has to be charged to high pressure, either via a hand pump, an electric pump or a large hight pressure scuba tank. Electric pumps that put out 4000 psi are rather expensive, so be sure to do your research and shopping carefully.

The Feinwerkbau 124 I mentioned is 45 years old, and theo other is about 38 years old. One thing if you get a spring airgun, no matter what type, NEVER cock and fire without a pellet in the chamber. It will cause damage to the gun.

Michael Michalski
Thanks again guys. The more I ponder, not just the expense, but the bother (charging devices, high pressure tanks etc,) I might just be ok to shoot my Cooper 57M with quality .22"s. Already got that stuff. Help! I can't decide what to do.

Jim M.
Michael,
Suggest that you spend some time visiting an Air Gun Forum such as https://www.airgunnation.com
The comments listed above are from folks who have experience.
Good Luck and have FUN!
Jim
Bill/Oregon
Michael, if you just want to dip your toe in the water for literally peanuts, consider ordering a Xisico XS 25 SFB from Mike at Flying Dragon. This rifle is only $85 shipped, and Mike lubes and tests each rifle, even at this price. No, the trigger is mushy and the rifle won't deliver dime-sized groups at 50 yards. But it will give you a real sense of what an "adult air rifle" is all about. Throw a decent airgun-rated scope on it -- I just put a Hawke 2-7X 32 AO on mine -- and have at it. If you decide you want more airgun, let your grandkids have a ball with the Xisico.

Michael Michalski
Bill/Oregon, Finally arrived today; looks nice. Now for the dumb questions: Instructions say "air gun" oil; OK? I bought the REX 3-9 scope too. Rings recommended? Of course it's way too cold in Michigan to go to the club and try it but I'll let you know when I do. Thanks, Mike

Steve E.
A good entry level gun with a high quality barrel is the Gamo Urban. Mine is a 22 cal version and it has served me well for almost 2 years. It is a proverbial tack driver out to 30 yds or farther with H&N pellets. I gave up the hand pump and have a compressor now, best investment I have ever made.

jdollar
If you are willing to invest in a compressor, get a first rate PCP- Daystate, Air Arms, Steyr, Weiruch.
Bill/Oregon
Michael, "airgun oil" does not contain petroleum distillates, which at the instant of very-high-temperature air compression in a springer can ignite, causing the phenomenon called "dieseling" and damaging the piston and seal. You want a silicone-based oil such as RWS Chamber Lube or Crosman Silicone Oil for your springer's chamber. Regular oils can be used for lubing the mechanical linkage points and protecting exterior metal surfaces.
I have been happy with the UTG/Leapers rings that fit the 11 mm dovetails on so many air rifles.