Henry Graves
Yeah, I've never had a gun that took 6 foulers to get back to normal. But remember, no bore is perfect, and a very light amount of fouling is a good thing. If you can spend 15 minutes and get your barrel 90something% copper free, stop there. If you're removing absolutely all the copper from the pores of the steel, it's going to take a few shots to "fill in the blanks", that means firing more fouling shots before you regain point of impact, and over time, a lot more rounds down the tube that didn't need to.
shootaway
It should shoot a good group without a fouler.I've had only one rifle that needed a fouler and that was a Ruger bolt action in 458 Lott.My second, new Ruger, in the same caliber,does not need a fouler.Of the 20 or so rifles I own,only the Ruger neede a fouler before it would print a tight group.This is after a clean to metal cleaning.I do not use oil to coat the barrel after I clean,unless the rifle will be stored for a few months or longer.If I did use oil,I would take it out and repeat part of the cleaning routine that cleans to the metal.That way I am sure the first shot will impact were it is supposed to.
Doc

quote:
Originally posted by Ackley Improved User:
Have you noticed that after a very thorough cleaning, especially with copper removers that the point of impact changes and remains changed for 6 or rounds?


Ted Kennedy's car has killed more people than my guns

swheeler
With the rifles I've owned uually the first one or two can be out, but a 375 H&H took about 6, then after 20 rounds it shot like a shotgun. I believed this was caused because of a variable pitch caused by a button that slipped in the rifling process, this thing could collect copper, it went down the road a dozen years ago.
shootaway
It seems my Ruger needs one fouler when shooting A-frame bullets and not the TSX.Here is a 4 shot,100yd group(open sights) I shot today with the 500gr TSX bullets and H4895.I was surprised to find that all 4 grouped tight after a good cleaning. 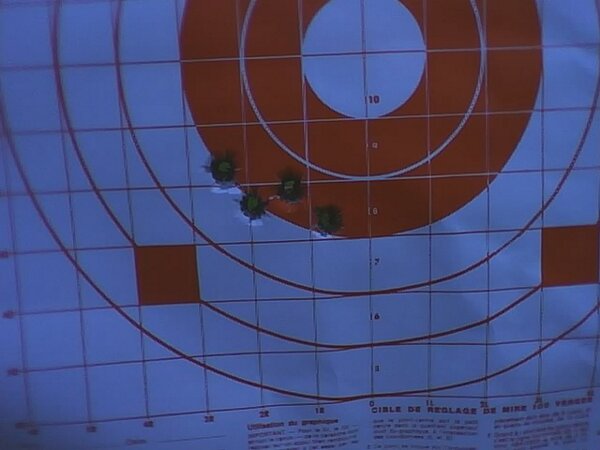 
"There are worse memorials to a life well-lived than a pair of elephant tusks." Robert Ruark

shootaway
Thanks SBT!
JAL
Aparently some do and some don't.
None of mine varied. . . once. So don't argue with RIP about it. He has strong medicine, and must have put the mocker on me.

Then my 30-30 started acting up. I used to be able to shoot it at 300 yards. Now at 50 yards the first shot goes about 3" low with the next two togeather in the bull. I have changed powder, and started testing with the mag loaded up, but I think RIP just ripped into me.

quote:
I do not use oil to coat the barrel after I clean,unless the rifle will be stored for a few months or longer.If I did use oil,I would take it out and repeat part of the cleaning routine that cleans to the metal.That way I am sure the first shot will impact were it is supposed to.

I agree. I THINK the "problem" with wandering first and second shots arise from barrels that have been cleaned and oiled but rhwn fired with the residual oil still in the bore. Some of that is ok but it doesn't seem to take much oil to mess those first shots up a little, as will a squeaky clean bore. What to do?

A BR "expert" (a real one) once told me that he cleans and oils his S.S. bores after each use. Then, prior to shooting, he re-cleans the bore with a fresh patch wet with Hoppes #9 to remove the storage oil residue, and the #9 is followed by two-three clean, absorbant patches. He said his first shot will be in the group. I've seen him do it too. His 6PPC groups are consistantly under 3/8" and frequently half that, winds permitting.

I tried it with my varmint and hunting rifles and - wow! - it works for me too!

I believe the #9 leaves a tiny trace of oil in the bore, not enough to hurt anything but the metal isn't squeaky clean either.

Others should try it, may work for them too!

The Maz
I just leave the bore fouled and only give it a good cleaning every 100 rounds or so. Preferably, I do that cleaning on the range so that I can re-foul the bore before departing.

Never seen a speck of rust, even with humidity.

nomatter how you clean your barrel, when you are done, swab the barrel and chamberf woth a product called Prolix.

Then dry the chamber and the barrel and shoot.

I have used this product, after cleaning with other products,and alone, to "punch" out my bbl durring extended shooting sessions at the range.

First round goes right where it should.

Fish30114
Hell NE 450, I love 'gear' so I just ordered some prolix, I'll let you know how it goes---Thanks!
Ackley Improved User
When I say clean, I mean having cleaned out ALL the copper fouling - that is, pure white patches left after many passes with Montana Xtreme copper remover soaked patches. NO BLUE left at all. That's when I notice the impact changed and mildly eratic groups. MOA groups return after 5 to 6 shots. Is this weird?
JAL
No,apparently quite normal in some rifles.
But not many get their bore totally clean. Even yours would probably leach out some copper over more time.
N E 450 No2
Fish

Let us know how it works. jusrt be sure to use Prolix in the chamber and dry it out as well.

In test I did with a dozen sniper rifles we used several different methods to totally clean out the copper, barrels were checked with a bore Scope, and then did the "Prolix thing".

It seemed to work pretty good.

Boss Hoss
Factory tubes are usually pretty rough and you may have to take several fouling shots. Most of my my rifles have Kriegers and almost without exception pretty much shoot to the same POI after getting all of the carbon and copper out.

Each tube has a mind of it's own so to speak when it comes to the amout of fouling that it needs or will tolerate. The borescope will remove any doubt if the tube is really clean or not.
k-22hornet
I have a Win M70, 1966 model, in 30-06. After a Wipeout cleaning, the first shot is off paper. Shot's 3 thru 22 are excellent, then groups start to open up. This is the most extreme I have seen in any rifle I have owned. It also takes the most applications of Wipeout to clean the copper out of it. Must be a very rough barrel.
rcamuglia
I have a Briley Custom .264 Win Mag. It shoots MOA groups when totally clean, I mean absolutely no copper. It takes 6 or 7 shots and then the group shrinks to .333 MOA. 1" groups at 300yds. Glad to see others have experienced this.
Steve Latham
As soon as poor groups are starting to show, Wipeout cleaning session, then six or seven flyers , followed by rounds through same hole 100 metres. 17hmr CZ American, Same routine with Sako Finnbear .270W, return to cloverleafs after four or five rounds, 7mm WSM Howa/Hogue stainless seems to be pretty well immune from excessive fouling, but still wanders a little after a good cleaning session, Tikka M595 .223Rem foxing rig is pretty good for around fifty rounds before it gets to being innaccurate, then a good foam out followed by a dozen or so rounds needed to bring her back on to one hole groups. Steve.

Boss Hoss
This is one of the reasons I quit playing around with factory rifles. The ones that I have built even the competition ones change Very Little if any with the 1st shot or two.

Case in point --- shooting my Chuck Grace built 300 H&H last month and after the shoot one clean to bare metal (took 5 rounds and and a little over an hour on this rifle before the fouling let up considerably and I use a bore scope to verify)shot 5 shots in less than 1 minute into .45 including the fouler. Always shoot this way to judge if there is any stress in the barrel that heat will bring out.

That being said I still shoot foulers when I am shooting sight in's during a match but always hunt with a clean tube.
Fish30114
Well, it's been about 3 months since I got and used the Prolix. I haven't used it as much as usual, little health issue took me out of play for several weeks--got even by having my Gall Bladder removed!

In 3 rifles where I know what they do after 'cleaning to the bone' I used the prolix, and they were much better in terms of POI being near subsequent shots. One rifle takes about 8-10 shots to 'settle down' and initial POI for the first shot have no consistency, can be 3 to 4 inches from point of aim without rhyme or reason.
This rig shot very near Low and left 1" from point of aim and center of subsequent good groups (after 12 or so rounds).

The second rifle shoots near Point of aim, but simply shoots larger groups til I hae about 20 shots downrange from her. Starts at 2 MOA, and shrinks down slowly over the first 4 to 5 groups (5 rounds each) to 1/2 minute. With the Prolix after cleaning it started real close to 1 MOA with first two 5 round groups, and on the third group tightened right up to about 1/2 MOA.

3rd rig is an old reliable 308, and it shoots pretty good all the time, just when 'cleaned to the bone' the first one is going 2" low, the 2 one 1" low, the third one about 1/2" low and the 4th just a skoche low, and then they are just right in there.
Well, in this one the Prolix really shined, 1st round 1/2" low, second one 1/4" and then the 3rd may have been a hair low, but I would call it good, meaning it cut the 'get back to normal' routine by several rounds.

All in all a good product and program IMO, I will stick with it!
shootaway
There should never be a change in the point of impact.The only time you will have a change is when there is a major change in weather conditions resulting in loose guard screws and different pressures on the barrel or action from the swelling of the stock.This problem can be corrected by firing a couple of sighters and tightenig down the guard screws.
Steve Latham

quote:
Originally posted by shootaway:
There should never be a change in the point of impact.The only time you will have a change is when there is a major change in weather conditions resulting in loose guard screws and different pressures on the barrel or action from the swelling of the stock.This problem can be corrected by firing a couple of sighters and tightenig down the guard screws.

I only have one rifle left that wears wood anymore, the Sako,All my fittings are torque set& checked regularly, Steve.

Boss Hoss
I used to believe that wood was bad for accuracy but have since learned that if the RIGHT wood is used it is VERY stable. Very tough to make a 15 or 20 dollar factory US walnut stock behave even if it is flawlessly inleted and bedded. The problem is that most people do not want to spend the money to buy a blank that is of the proper type and layout or have built correctly.