New Mexico Scaled Quail and one of my Caping/Bird and Trout knives. Blade is CPM154, handle is black G10 with stainless mosaic pins. 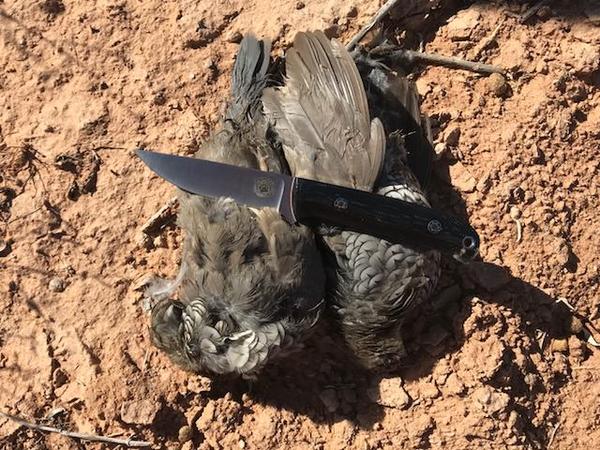 Texas Killartist
Nce work Lee .
Thanks.
Texas Killartist
Both
The knife
And post.
Edod
That was my picture so I should comment. I can't speak highly enough about Lee, or his knife. My hunting buddy has a semi skinner that Lee made for him and I was quite impressed with it when we used it on an Axis deer hunt last fall. I was discussing ordering a drop point hunter with Lee, and told him my friend and I were going after scaled quail. He offered to send me a Caping/Bird and Trout knife as a no obligation loaner for the trip. I was told to use the knife anyway needed and not to worry about it. If I wanted to buy it at the end of the hunt, I could, if not, just send it back. The knife was very sweet in the hand and was fabulous for boning on the quail. The workmanship was wonderful. I was very happy with it. Although, I returned the knife, I have ordered one to match the drop point I had ordered and my friend has ordered one to match the semi skinner he has. Dealing with Lee has been a pleasure. He responds quickly to emails and he does what he says he is going to do. I highly recommend him for first class work and service.
larrys
I have one of each of Lee's knives, the skinner, drop point and Bird and Trout. They are all fantastic knives. Lee is a great guy to work with. He made the scales on two of the knives from wood I sent him.

"Peace is that brief glorious moment in history, when everybody stands around reloading" -- Thomas Jefferson

Use Enough Gun
I have a stable of Lee's knives and everything said about them I concur in.

I also did what Larry did in ordering a couple of them from Lee and sent him the wood to use with two knife handles. I subsequently gave one of those knives to an old friend who deals in gunstock blanks. He was very happy with the knife. Everyone should have at least one of Lee's knives!

Jerry Fisk
Lee, you did good.

Brittman
I have a Bird & Trout knife on order with Desert Ironwood scales. It will be a nice match to Lee's semi-skinner! Nice workmanship certainly.
Brittman