The Accurate Reloading Forums
Need a new Folder--Suggestions
This topic can be found at:
http://forums.accuratereloading.com/eve/forums/a/tpc/f/5021043/m/831103567
Prewar70
Need a new Folder--Suggestions
I want a folder with 3 blades, gutthook, saw, and skinning. I've looked at the Wenger, Beretta, and Browning and want to keep the cost under $100.

Any suggestions or recommendations would be greatly appreciated. Thanks
billinthewild
Look at my thread on the Buck Infusion I have for sale....well under $100.00; saw, gut hook and skinner....two blades, brand new....


"When you play, play hard; when you work, don't play at all."
Theodore Roosevelt

Fish30114
I've got the Beretta and the Browning, the Browning seems a little better on fit and finish, but damn their steel is hard to get an edge back on. The beretta sharpens really easily. I always end up waiting and sharpening the Browning at home where I've got a lot more sharpening options.

In the field I just carry a little steel and a small crockstick, works OK on the Browning, but not good!

Good Luck
montycalhoun
I would go with the Browning

Mark
Well here is one a bit under your budget- $11

unfortunately really cheap knives tend to scare me off, however I suppose for the price you don't have much to lose, it can always sit in a drawer and an extra knife is good to have as a loaner.

A buck alpha at $60, though not my cup of tea for design:

Ontario Knife makes one for $55: 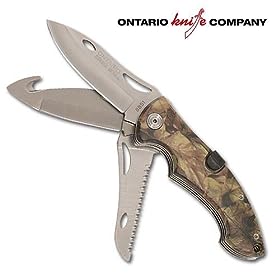 Case makes a exchangeable blade pocket knife for $80, but I think that is not what you want since if you have 3 or 4 blades jangling around might as well use separate tools

Personally, I'd check out the browning knives too. I have a couple of them and other than a fillet knife that had the blade snap when I sat on it (it was in the sheath!) I like their stuff. It seems there are a couple different browning kodiak patterns (or I may have just looked at the same one differently).

I don't use a bone saw (don't need to for deer) and use a separate gut hook, but I can understand wanting all 3 in one tool.

billinthewild
The Buck Infusion I have for sale is very similar in design to the Buck Alpha pictured above, except that it has solid advantage camo scales, and features their Infusion steel blades. $45.00 takes it.


"When you play, play hard; when you work, don't play at all."
Theodore Roosevelt

pichon1
I bought a Beretta from their London shop about a year ago. The finish is brilliant (extremely fine tollerances, stag horn handles) I love it.
billinthewild
Don't buy mine, but buy American.....there are dozens of excellent American knife makers.

"When you play, play hard; when you work, don't play at all."
Theodore Roosevelt

22WRF
I have used the Remington Big Game folder for years and like it. Two blades, but everything you need.