The Accurate Reloading Forums
Damascus Sendero with scratches
This topic can be found at:
http://forums.accuratereloading.com/eve/forums/a/tpc/f/5021043/m/2521049012
Jerry Fisk
Damascus Sendero with scratches
This is the Sendero model with Damascus. The pattern of Damascus in the blade is a Dog Star pattern. The stainless guard is deep relief engraved. The handle is Sambar Stag. I sure hope they like it as long as it took to make it. 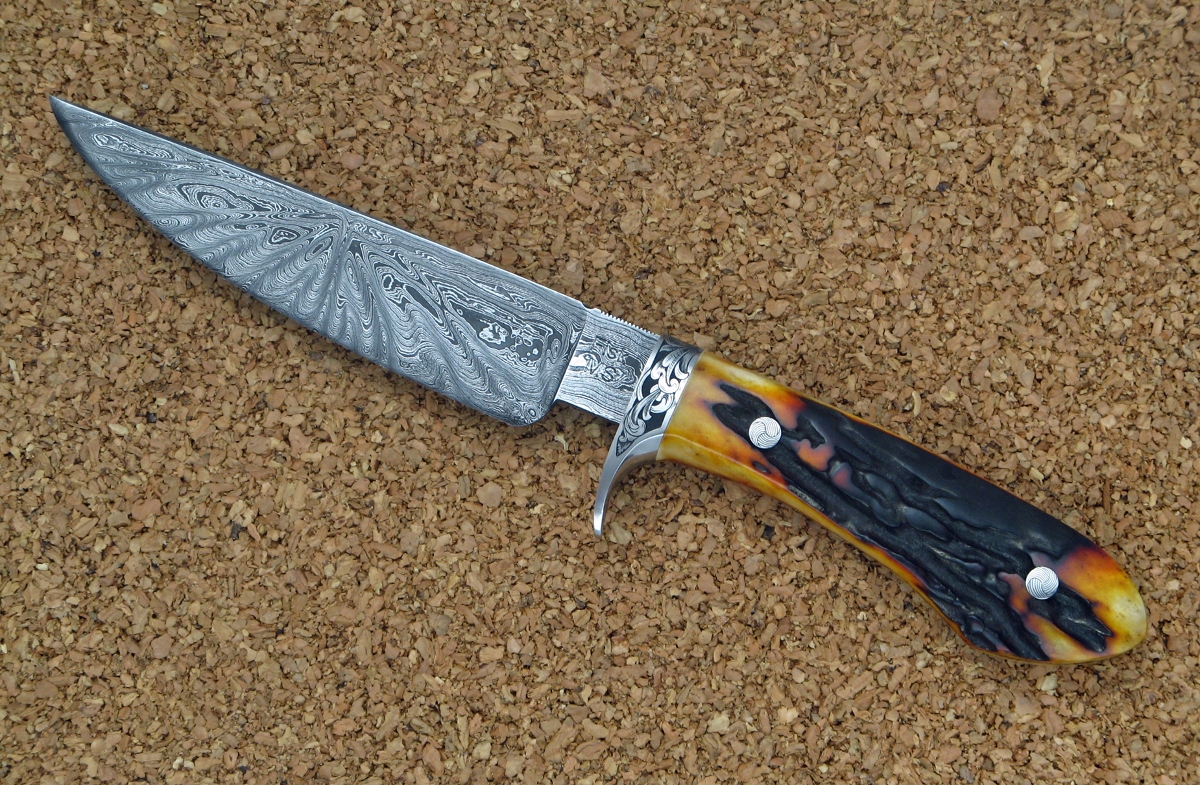 Keep the Pointy end away from you
www.jerryfisk.com

Jerry Fisk
Yes, it is dyed. When I finish the knife I then soak it in mineral oil for 12 hours.
I soak my own stag/ivory knives in oil twice a year to help prevent cracking.

drm-hp
Wow, that would be absolutely gorgeous with elephant ivory. We should talk.
Jerry Fisk
drm, ubet they look good in ivory. I know a few years ago I extended the engraving from the guard onto the ivory. It was the first time I had engraved ivory.

I have used ele ivory, mammoth, hippo but the most stable ivory is walrus.

Geedubya
That dyed Sambar Stag is killer. A work of art, as always.

lindy2
so how long did it take to make it?
Jerry Fisk
Lindy, I never keep up with it for sure. I know in a years time, full time, I make about 18, maybe 20 knives, it really depends upon how the orders were lined up for the year. I have made as few as 12.
Just the engraving such as this one takes about 25 hours or so per inch. Gold inlay adds another 5 hours or so, again, that is just for the engraving. I did up my SP snake pistol with full coverage to practice, I knew not to keep up with the time on it because that would just be depressing. Looks good for a snake shooter though.

Keep the Pointy end away from you
www.jerryfisk.com

I'm going to jump into Jerry's thread and ask you why you want to know how long it takes to make it?

For the knife maker the question is kind of a losing proposition. If Jerry tells it takes six hours (which obviously from his reply it takes a helluva lot more than six hours) he is overcharging. If Jerry tells you that it takes 100 hours, then the perception is that he is a poor business man. In my mind, it's a no-win situation and poor form to ask the question.

Gorgeous knife.
Idaho Sharpshooter
thank you Lee, especially not having a clue as to what the knife sold for...
Jerry Fisk
Thanks guys.
In the interest of education as I am several years backed up one like this knife sells for about $3200, it just depends upon engraving and handle materials. They can get on up there for those that desire that. My prices normally run from this one to up to a 6 figure one but those are not as common.
I am working on one now that is a 6 figure piece but as near as I can figure it the knife will take one and one half year of actual time to make and do that will take about 3 years of off and on to get it done. It has taken 4 years to gather the materials and I still have some coming in.
But, no, I do not keep up with how long it takes to make a knife. When it is done it is done. I started making knives I sold them for $8.00 each. It has been a long up hill struggle to learn what I have about my chosen field of life. I will never learn it all, just how to get better at what I do now. Most folks are not as interested in how long the surgery took as did it work or not. Knifemakers are the same, it makes no difference if it works.

I have a client that buys one knife every 3 years. It takes him that long to mow yards as a side job from his regular job to save his money as a grocery stock boy though it is 60 years old. He has never had much money. It is a struggle for him to get a knife. His knife is just as important as any other knife I make. I make no distinction between who the knife is made for, the knife will work and be as nice as I can make it for each person according to his wishes.