The Accurate Reloading Forums
Grinder
This topic can be found at:
http://forums.accuratereloading.com/eve/forums/a/tpc/f/5021043/m/1591058632
lindy2
Grinder
has anyone here made their own 2 x 72 grinder and then used it to make knives.
WoodHunter
Von Gruff built a very nice one. Hop over to African Hunter site and read his thread in entirety, all 24 pages. You will learn a lot!!!

https://www.africahunting.com/.../page-24#post-403518
Texas Killartist
Von Gruff is one smart man !
Von Gruff
Thanks guys. The main thing is to make sure of exact allignment between the drive wheel, tracking wheel and platen or grinding wheel, as very nice a knife can be made on a home built as on a shop bought as it is the man doing the grinding that makes the difference

lindy2
Well, I would just like to try it so I don't want to spend a whole lot of money on it if I have to junk it. But I don't want to get a piece of shmidt either because it won't work right and I won't like it. Gotta figure out something.
Lee Baumgart
Mine is home built. I used Midwest Knife Supplies no-weld grinder plans and had my brother who welds for a living weld it up. Materials are inexpensive. Motor and wheels are where you end up spending some money. I'very made a couple of knives on mine.
Lee
lindy2
What did you use for a motor and wheels?
Lee Baumgart
2 hp Leeson motor, purpose built drive and tracking wheels. I hollow grind blades so I started with an 8" contact wheel, discovered its limitations pretty quickly, bought a 10" wheel which I have ground a bunch of blades with and will be adding a 12" wheel in the near future.
Lee
lindy2
I have watched that video by Bob Loveless a number of times and it looks like he might have been using a 14 inch wheel.

Problem with those wheels is that one 14 inch wheel costs as much as 4 new tires for my car!

What about just using a regular grinder?
Lee Baumgart
I'm sure more than a few knives have been made on a hard wheel grinder, given enough time and elbow grease you can make one using a hacksaw, file, and hand drill, but the results might leave something to be desired.
Lee
lindy2
Well, as I said, I am just in the "try it to see if I like it" mode so the results aren't as important as the experience doing it.

Maybe I should look for a local person who has a grinder and see if I can use it (paying for the use of course) for a few hours to see how it goes. I don't want to buy a whole bunch of stuff only to find its not for me!
dinsdale

quote:
Originally posted by Lee Baumgart:
I'm sure more than a few knives have been made on a hard wheel grinder, given enough time and elbow grease you can make one using a hacksaw, file, and hand drill, but the results might leave something to be desired.
Lee

I made this knife to take on a hunt to cut an elephants' tail off. (turned out I did some skinning/quartering with it too).

Just 4" angle grinder+files, torch for annealing and hardening (vegetable oil) Some silicon carbide paper and a few diamond stones. Most of this I had on hand. Bought O1 tool steel and some brass rod. Walnut I had as leftovers from a stock. 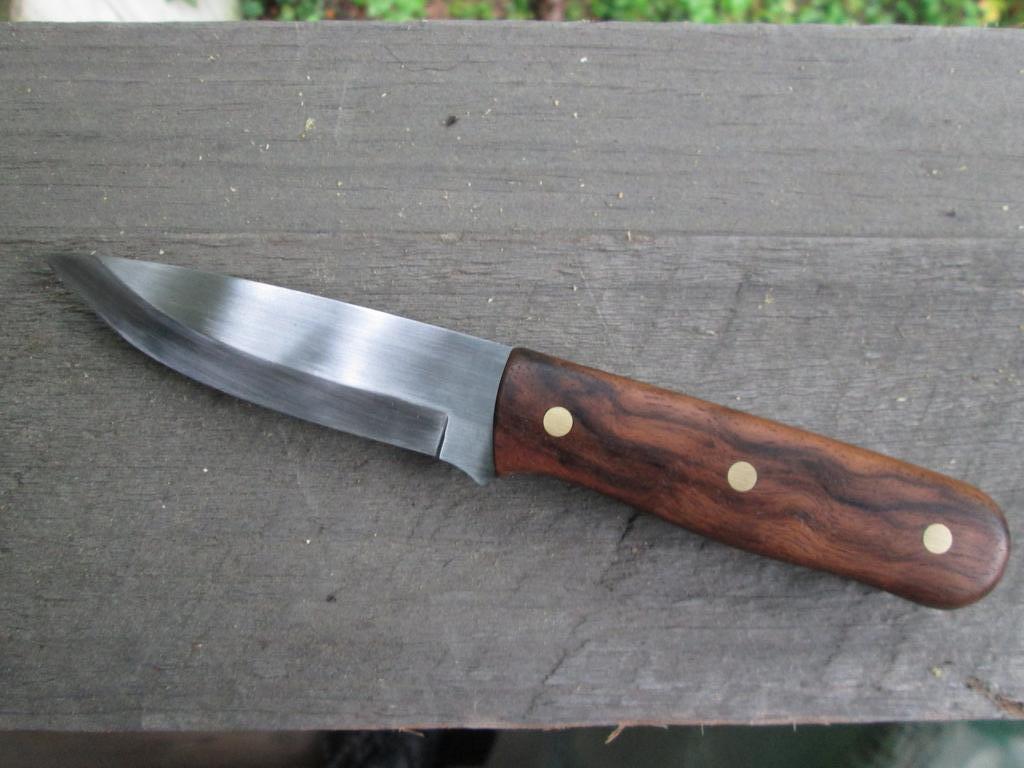 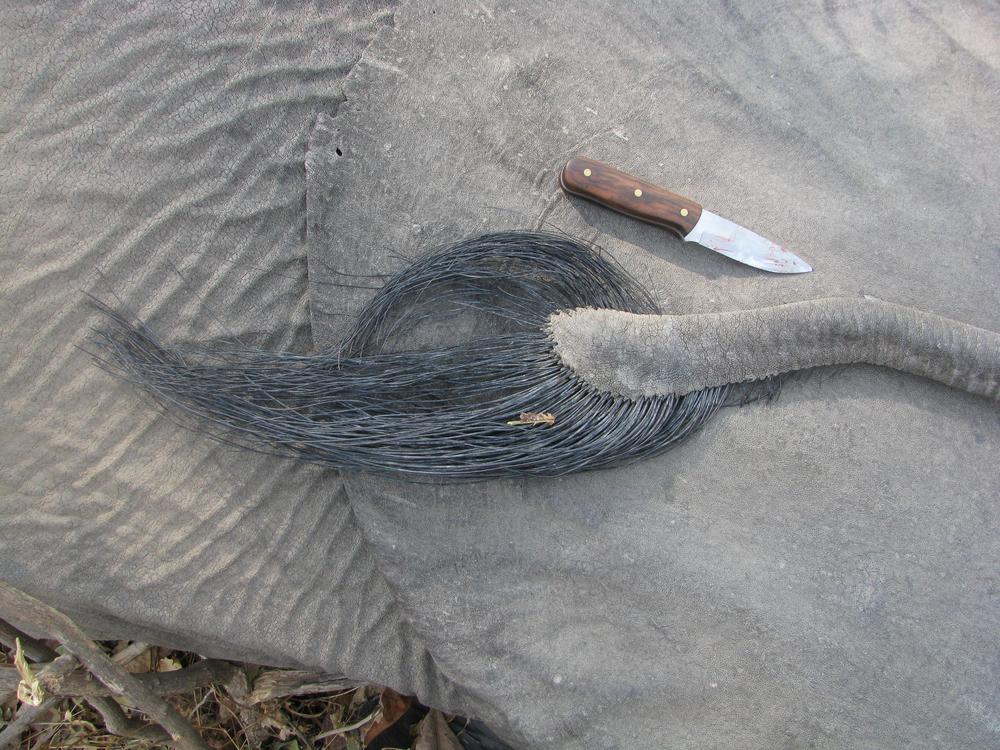 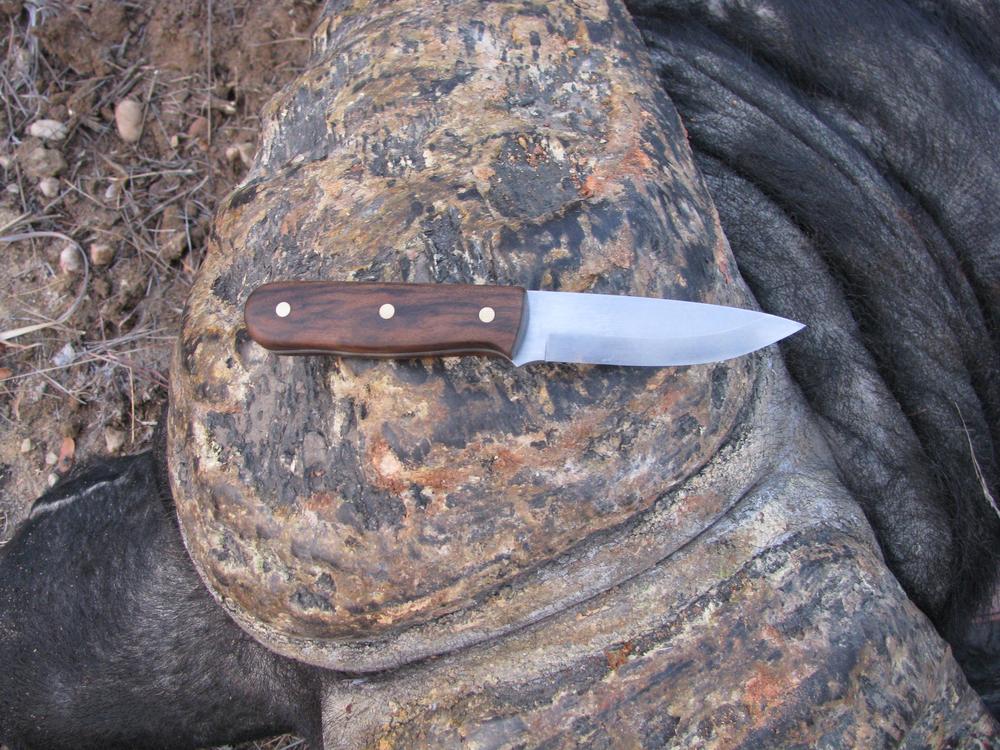 lindy2
I second the thought on the nice knife. But I don't believe in shooting elephants.
lost okie

quote:
Originally posted by lindy2:
has anyone here made their own 2 x 72 grinder and then used it to make knives.

You are welcome to run one of mine and see if you like the process. Mine are factory jobs but they still grind.
Mike
lindy2
Mike

Your offer is very generous and I thank you for it.

However, its a bit far as I am in Minneapolis.

But thank you again!

Von Gruff
So I guess offering time on my grinder here in New Zealand is out of the question.

quote:
So I guess offering time on my grinder here in New Zealand is out of the question.

That is funny. Thank you for the laugh.
Ray B
I've been to New Zealand. It's an offer that I wouldn't turn down. Just plan on being there long enough to soak in all of its beauty, especially down in the Dunedin area.
Von Gruff
I am just an hour up the road from there Ray on the road to central otago which has some of the most ruggedly beautiful scenery in the country.
This is where I go goat hunting . Parts 2, 3 and 4 will be linked to this one.
https://www.youtube.com/watch?...FMg&feature=youtu.be

For Lindy2 this is doing the final sharpening on my home built grinder. There are a few more videos if you checkout my youtube channel
https://www.youtube.com/watch?...ibI&feature=youtu.be

Watched your videos. Good stuff. You live in some very beautiful country.
Von Gruff
I certainly never tire of the high country and am away back up there next week to see the GS and another knifemaker friend.

Does New Zealand have a steel industry. I was just curious if the knives you make use bar steel that was made from ore mined in New Zealand.
Von Gruff
No from NZ steel. My main steel usage is from 10 series barstock with some 15N20 as well which all comes in from Australia who source it from the US although the O1 comes from England.

This lot is all done on my home built grinder

A little more leatherwork this morning 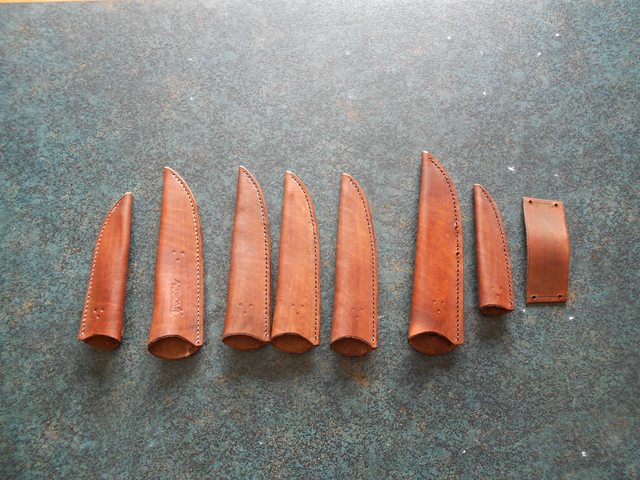 To get them ready for these knives that just need thier final sharpening before shipping. I tried a couple of different backgrounds for the pics this time. All blades are either 1075 or 1084 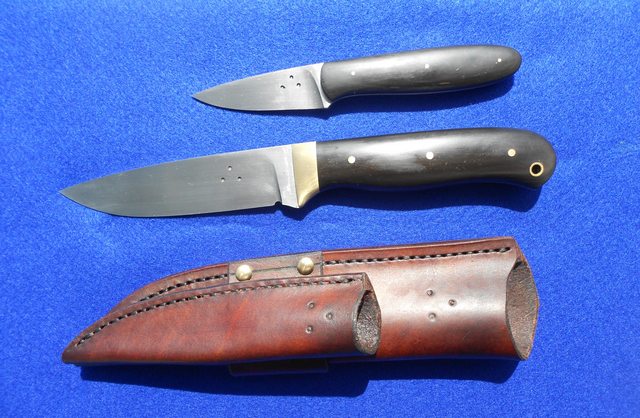 A safari knife with walnut and brass. The walnut was from the buyers rifle stock blank to be a companion piece for a new rifle. 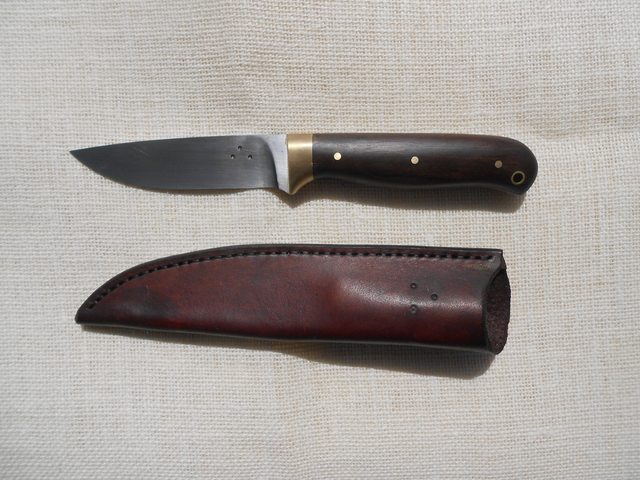 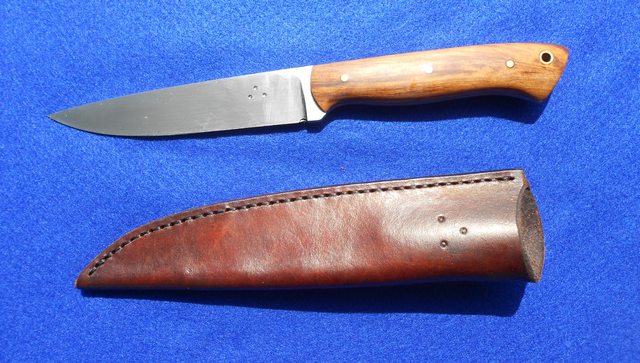 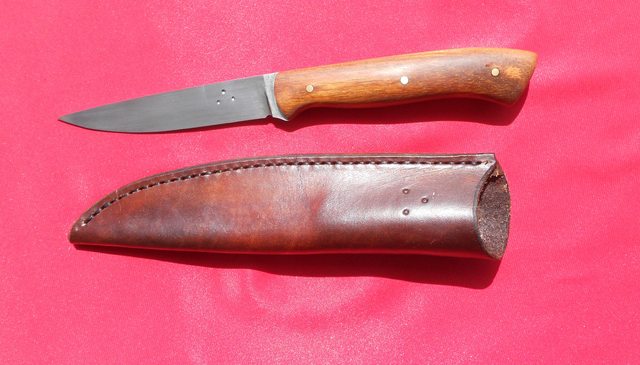 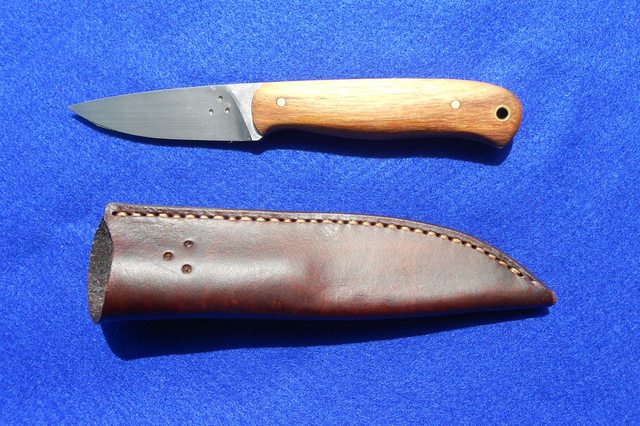 And the last one is an AH big game hunter with blackwood and buff horn.

lindy2
Those all look like good honest hard working knives.

Also looks like your not real big on high polish on knives.

Nice looking leatherwork as well.
Von Gruff
No high polish as my knives for hard work and stop at a 600grt satin finish. A high polish will show marks more than on a satin finish.It is also to do with labour input as I have a reasonably high count order book and being a one man band, and retired as well, I like to get them done in a reasonable time frame.

lindy2
well, if anyone has a junky old homemade belt grinder sitting in the corner gathering dust and wants to get rid of it real cheap let me know.