The Accurate Reloading Forums
Anyone on.here have a .333 swager that makes them from.338 bullets ?
This topic can be found at:
http://forums.accuratereloading.com/eve/forums/a/tpc/f/3621043/m/8611042932
dgr416
Anyone on.here have a .333 swager that makes them from.338 bullets ?
I.have a bunch.of 338 bullets that I Need.to.have swaged for my .333 okh belted mag Elmer Keith rifle .I.have.Been getting some of Elmers favorite bullet the 275 grain Speer bullet.I.have a few more different ones to.try also.I.heard from Redding you could down.size them.in.their neck bushings also.in.two steps.I.want to make at Least 500 .333bullets to.have a supply .I don't want to mess up.these old bullets want to.let someone who.knows how to do.this !
bpesteve
Here's a thought - it turns out that the "nominal" diameter of a .32 S&W/.32 Mag/.327 Mag case is .333". I have a set of dies for those cartridges and some .338" bullets, so this afternoon I'll try running a .338 bullet through the sizing die and report back on what happens.
bpesteve
Dang. I had forgotten that the dies I have are Hornady dies, and the sizer die has one of their infernal collet-secured decapping assemblies. I might be able to push a bullet into the die, but the hole for the decapping assembly isn't big enough for the bullet to fit through on its way out of the die.

I did measure the inside diameter of the nitride sizing bushing, it's .330" to the best of my measuring capability. I don't know how much a .338" bullet pushed through there might spring back, but it would probably end up between .331" and .332". Hard to say.

Give Lee Precision (the loading die folks) a call, I believe they'll make you a 'draw' die to do the job. Last I checked they didn't even charge too much to do it, either.
p dog shooter
I would buy a Lee push through sizer in the closest size polish it out to proper size and use that I have done 429 pistol to 416 in one pass.

338 to 333 should be easy.
iiranger
In his books Mr. Ackley suggested that Old Elmer was fond of the .333 Jeffrey bullets and designed the .333 OKH around them AND THEN found that the common barrels available were .338 for the old .33 WCF. HaVE you slugged your barrel? If it is .338 just shoot as is. Any die shop/machine shop can make you a hardened .333 die to your specs. Or you could polish out a .323 (8mm) die. And tap the slugs thru. I believe LEE does custom work on a limited basis. Huntington Die shop for sure. Luck. Happy Trails.
dgr416
It's .333 diameter bore had it slugged .I was told you could reduce them with neck bushing dies .003 at a time but I don't know how you push them through the base with the ram.You can't use bonded bullets but you can use partitions and regular core bullets .I guess I will try some of the old hornady bullets first I have just to see .You have to go a little below the diameter then they spring back .Redding was at the NRA show last year and said how to do it but they did by tell me what the part was you put on the ram to push the bullet through .It has to be push all the way through .
Huvius
The ram is attached to the press just like a shell holder.

https://leeprecision.com/bulle...g/bullet-sizing-kit/
dgr416
I just bought a six ton press at harbor tools that should work with one or two passes .
I.Will order my swaging dies soon .I might try those Lee sizing dies or Redding .I hope it works .
I.just shot ten of My Elmer Keith bullets hate shooting them .I am going to try some 275 grain Speer bullets and some 200 grain hornady and 250 grain partitions .If I can find some I will try some old 200 grain ballistic tips.I am glad to get this press it will help big time .Hopefully I can make a good bench for it should work awesome.I guess I need .332 or .331 dies to make .333bullets because of Spring back in the bullets .This press should make it really easy with one size only needed .Hope they shoot good !
Bill/Oregon
DGR, if you don't get satisfaction with your setup, contact Dave Corbin. He can make a die that will work perfectly. One thing: A die that reduces the size of a bullet or core is called a draw die. A die that increases the size under pressure is a swage die. Draw down and swage up.

enfieldspares
I had a friend who had, as I once also did, a .280 Ross. He said that with jacketed bullets it was better to swage up than to draw down .

Apparently, he claimed, there was a risk that if drawn down the jacket being a elastic alloy could spring back out (slightly) and detach from the non elastic lead core.

For all I know its a load of nonsense. Is there merit in what he said? For say a 4 thou increment? Or just nonsense?
Bill/Oregon
Spares, I had a Corbin "bump" die that allowed me to bump/swage a .264 bullet up to .268 to better fit the Carcanos I used to shoot. I could never tell any difference visually. But I have also drawn bullets down several thousandths and depending on the bullet construction, you do sometimes see nose deformation as the lead is squeezed out a bit like toothpaste. This never made much difference in accuracy, but it might very well have disrupted any sort of internal "interlock" mechanism designed to reduce core and jacket separation. I would probably not count on either a bumped or drawn bullet for use on something that can bite back without doing more research.

theback40
Ross Seyfried did an article on ceterless grinding bullets from .338 to .333. By grinding, no disruption of core/jacket fit.
I doubt it was cheap though!
Saeed
If you know anyone with a CNC lathe they can turn bullets to any diameter for you.

Greyghost
Push them through a Redding neck die bushing...

quote:
Originally posted by Bill/Oregon:
DGR, if you don't get satisfaction with your setup, contact Dave Corbin. He can make a die that will work perfectly. One thing: A die that reduces the size of a bullet or core is called a draw die. A die that increases the size under pressure is a swage die. Draw down and swage up.

Don't know where you get those definitions, most definitions of swaging is reducing an object in size but can also be forming a belt or other shape. Drawing is a different process using a die and punch to shape an object into another e.g. bullet jackets are drawn from a copper alloy slug using dies and punches to form the hollow while the metal is drawn out in length (in the die) to form a hollow tube closed at one end.
Forming gas checks from a punched out circle of copper or aluminium is another form of drawing.
theback40
This isn't what you are asking about...
I think Privi Part. imports a .333 bullet for some 8. something military caliber. FMJ's, but would work for just shooting bullets.
WoodHunter
A piece of 1095 for the die, a little lathe work, quick heat treat, bead blast and polish, make a pusher and you have it. I have a bunch of chucking reamers, many in bullet sizes. Handy things. 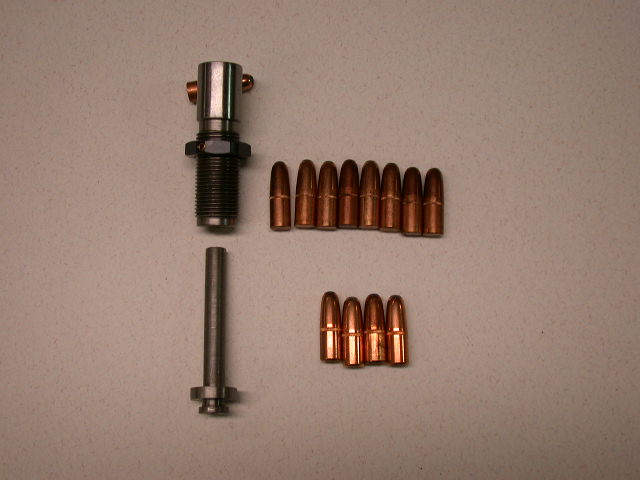 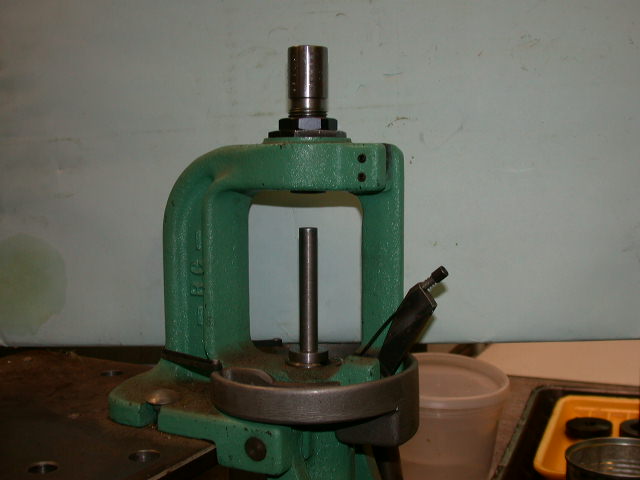 packrattusnongratus
Eagle27 you are dead wrong. Bill/Oregon is correct. Look in a dictionary or get a Corbin Swaging book. Packy
georgeld
Couple years ago I was going to run some .375
Hornady bullets thru a Lee sizer die to make.
'358 slugs.

Never could get one all the way thru. Jammed
tight each time. Ruined the bullets hammering
them back out with a punch.

well lubed with sizing wax too.


"Gun Control is NOT about Guns'
"It's about Control!!"
Join the NRA today!"

Magnum Hunter1
Lots of good info that I have been looking for.
So I have a specific question.
Do you think the Lee .329 die would be usable to size down copper jacketed .338 bullets for my .318 Westley Richards (.330 diameter)?
Thanks in advance
p dog shooter
I give it a try if they are to small you can polish it out a bit.
Magnum Hunter1
Thought I would give a report in case someone else was in the same boat. I ordered a Lee .329 bullet swage die to size down some .338 bullets for my .318 Nitro Express Rimless. Lubed up some bullets with regular die lube and ran them thru. They came out exactly at .330. Curious how accurate they will be but we'll see. Lee die worked perfectly and with much less effort than I anticipated.
p dog shooter

quote:
Lee die worked perfectly and with much less effort than I anticipated.

quote:
Originally posted by enfieldspares:
I had a friend who had, as I once also did, a .280 Ross. He said that with jacketed bullets it was better to swage up than to draw down .

Apparently, he claimed, there was a risk that if drawn down the jacket being a elastic alloy could spring back out (slightly) and detach from the non elastic lead core.

For all I know its a load of nonsense. Is there merit in what he said? For say a 4 thou increment? Or just nonsense?

This is spot on. In the process of swaging the jacket and core are slightly undersized. Then when the core is seated in the core seating die the jacket and core are swaged UP to the exact diameter of the precision die.
Sizing down can be done to a small degree, but the spring back of the copper jacket can initiate core seperation. Typically sizing down is for cast bullets.