The Accurate Reloading Forums
Where Did That Phrase Originate?
This topic can be found at:
http://forums.accuratereloading.com/eve/forums/a/tpc/f/3611043/m/4321046052
Kensco
Where Did That Phrase Originate?
Example No. 1 - Blowing Smoke Up Your Ass - https://en.wikipedia.org/wiki/Tobacco_smoke_enema "Doubts about the credibility of tobacco enemas led to the popular phrase 'blowing smoke up your ass.'"

This procedure is still heavily used by members of Congress.
NormanConquest
When Steve McQueen dided of colon cancer he had been taking treatments in Mexico as the FDA did not approve in this country.
This was in the early 80's. I don't recall if the enema treatment was tobacco or coffee.Whatever,in his case it did'nt work.

NormanConquest
I could get to like this discussion.Addendum:the whole 9 yards we have always heard. The inception of that was because the waist gunners in the B-17 bombers had a belt fed Browning that had a belt of 27' thus if you used up your belt shooting at a Messerschmidt Bf 109,you gave him "The whole nine yards."

"Quack, in the sense of a medical impostor, is a shortening of the old Dutch quacksalver (spelled kwakzalver in the modern Dutch), which originally meant a person who cures with home remedies, and then came to mean one using false cures or knowledge."
NormanConquest
I still take Military History Quarterly,however the colunm that was written by Christine Ammens concerning phraseology has a new author that I'm not as impressed with.Basically,I want to learn something new,not a recap of what I already knew.I enjoyed her writing.She most likely has a website.

Use Enough Gun
I've heard of coffee enemas, but never had one.

Bobster
Just a phrase that illustrates a useless comment used to BS someone. Another is "shot my wad". Referring to a soldier, out of ammunition, who fires his muzzle loader with just powder and wadding as a last resort. IE., I gave it all I had.
tomahawker
Let’s get down to brass tacks. Always heard it came from early frontier trading. After goods were bartered, small discrepancies we’re evened with brass tacks, wrapping up the details thus concluding the trade.
NormanConquest
There has been some contention on this one; however I will believe the folks at Military History Quarterly before I believe Snopes.The term Cold enough to freeze the balls off a brass monkey.In the sailing days ships loaded with cannon did'nt want cannon balls just rolling around the deck,most of them having an internal powder charge.They devised carts that were used to stack the balls pyramidically + were made of brass so there was no chance of a spark between the iron balls + the brass carriage. These were called Monkys after the inventor.You can figure out the rest.

NormanConquest
C'mon guys,step up + share some bits of trivia,I as well as others find it entertaining + hopefully mind enriching.I'm a history major+ math minor that found out early that I could make more money running a sheet metal shop than I could ever make teaching. That's pretty damned sad really.Be that as it may be I can not be the ONLY one to tell tales of phrase origins. REALLY!'Enquiring minds want to know'. (Sorry)
Any new knowledge,if true is always appreciated.That's how we make history REAL.If it is rewritten as the victors are prone to do it does not reflect the historical TRUTH of the time. At the risk of raising some feathers;the Holy Mother Catholic Church was perhaps the worst offender.Enough rant.please share a few for us all.

quote:
Originally posted by Use Enough Gun:
I've heard of coffee enemas, but never had one.

Just drink it, it ends up there anyways.

NormanConquest
True that But as the old phrase once said in it'd\t wisdom. "
shit

NormanConquest
Internet FUBAR;no surprise.Nothing that I had to say;interested to hear from new posters of intellect.

NormanConquest
We have all heard the children's rhyme."Ring around the rosie".That came from the Bubonic plague that spread through London prior to the great cleansing fire of 1666 Say it to yourself + you will see the correlation of every phrase.

craigster
" I'll be there with bells on. "

Take your pick.
Dutch44
I'm still trying to figure out "I don't give two shits." Does one just give one?
craigster

quote:
Originally posted by Dutch44:
I'm still trying to figure out "I don't give two shits." Does one just give one?

We go in the woods (or wherever) to "take a shit." How does it become taken, rather than left ?
Kensco
To "spill the beans". Meaning to give away a secret or to confess, the term spill the beans derives from the electing of a council member in ancient Greece. Each council member would vote with either a white bean (yes) or a brown bean (no), and these would secretly be put into a jar, and no one would know which way the members voted. However, if the jar was knocked over, or emptied, causing the beans to spill out, the proportion of yes and no votes could be seen.
craigster

quote:
Originally posted by Dutch44:
I'm still trying to figure out "I don't give two shits." Does one just give one?

Who gives a shit ?
Kensco
"Tying The Knot". Possibly from the Celtic (pagan) marriage ceremony of handfasting, where the hands of the bride and groom were tied together for a marriage "contract" of one year plus one day that the newlyweds promised to stay together prior to the marriage becoming "legal." If the husband and wife decided at that point they were not for each other they would part. If not, the marriage was then forever.
NormanConquest
Damn good policy as well. You ought to be able to figure out in a year if you got a gold digger.I say that but I did'nt + it cost me dearly.

Kensco
"Dead Ringer" - From the late 1800s. A "Ringer" being a horse substituted for another of similar appearance in order to defraud.

The "Dead Ringer" is therefore an exact duplicate.
butchlambert
My Dad being a career Air Force type was full of them:
Don't get excited on your first enlistment

I'll add to it later.
Jim Kobe
Back when Iwas a kid, the old-country folks used this one when referring to something sticky:

"Quack, in the sense of a medical impostor, is a shortening of the old Dutch quacksalver (spelled kwakzalver in the modern Dutch), which originally meant a person who cures with home remedies, and then came to mean one using false cures or knowledge."

I'm gonna throw a little more conjecture into this.

Quaksalver is very close to quicksilver, a user of mercury ointment ?

NormanConquest
Yeah,in the early 19th century mercury was used as a cure (supposedly) for V.D.

Kensco
"The butt of the joke" doesn't have anything to do with your rear end. - May have originated in the early 1600s in England. "Butts" were archery targets erected permanently in or near a village or town for archery practice. A "butt" is therefore a target, so the "butt of a joke" is the target of a joke.
butchlambert
"The local bond holders" was the term for the more affluent people.
jjbull
Take 5 and Roll One.

Many of you have heard this but who knows the origin?

Legend around here says it came about like this:

One Monday morning, a young strapping Montana State grad showed up on the job and his first assignment was moving a stack of cross-ties. He hoisted them on his shoulder and moved them to the new spot.

When the Boss saw this, he suggested: "Hey, you should be doubling up on those". Now, the poor dumb MSU Grad started putting one tie on each shoulder and carrying 2 at a time.

Give me the simple life; an AK-47, a good guard dog and a nymphomaniac who owns a liquor store.

3006va
Tighter than Dicks Hatband?
NormanConquest
I was told by a friend that grew up in the 40's that it was a reference to Dick Tracy as he NEVER lost his hat.

NormanConquest
The term 'scuttlebutt'was attributed to the sailing days.The cask of drinking water was called a scuttlebutt.The sailors would gather round (just like a water cooler moment today)+ gossip,etc. 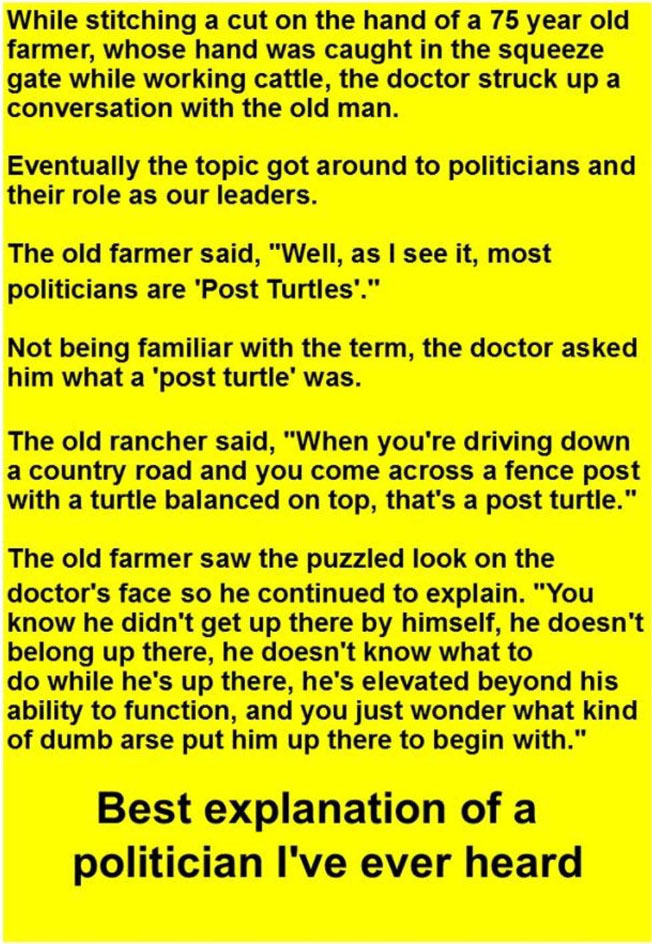 NormanConquest
Crute I admit but the old plumber that I heard it from was a bit salty.

DCS Member
Not a phrase, but a term: kidnap.


I meant to be DSC Member...bad typing skills.

NormanConquest
Yeah,that one scared the hell out of me when I was a kid.