The Accurate Reloading Forums
O/U rifle shotgun recomendations
This topic can be found at:
http://forums.accuratereloading.com/eve/forums/a/tpc/f/335105333/m/7121076162
eny
O/U rifle shotgun recomendations
Thinking I would like a combo gun.Something that has scope mount. 12ga and 30 cal or larger rifle. would like opinions on newer models
BaxterB
Look for a used Hoenig Rotary Round action. Although I think the largest bore he made was 20.
eny
Hoenig a little over kill for me

crshelton
Savage made some interesting combination guns, so you might look there. Here is a pic of my Savage .22 Hornet over 12 ga turkey gun taken on a New Mexico prairie dog shoot. 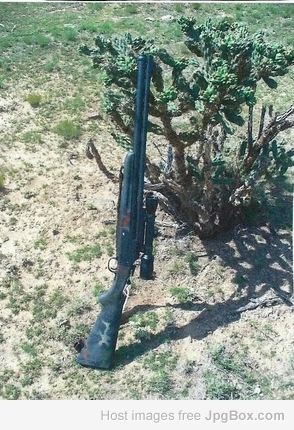 I think some were made with 30-30 rifle barrels.

Biebs
There's a Krieghoff Ulm sidelock up on Gun Broker for $4,995 or thereabouts, with mounted scope. It should be priced much higher than that.
eny
I notice that it is "sold" on several other sites, that make me wonder, but will follow it.
Thanks
Wallyfish
The Valmet combos are a great value, excellent accuracy and good availability. I have been into them for several years of varmit calling and with the double rifle barrels, hogs from stand at night. I believe the common complaint is the are heavy. Yes but shooting 3" mag #4 Buck and 9.3x74r, the weight is beneficial. Plus the heavier weight rifle barrels do not heat up and jump around like the lighter solid attached barrels do.
JonP
I second the Valmet. The Sauer model 54 would be worth looking for. I know Dale Nygaard had several a while back.
mlfguns
There is a CZ o/u 12 gauge over 7x57R on sale for $900 on Gunsinternational.
eny
Thanks everybody. will look at those mentioned. Hoping to find rifle in 0-6 or 9.3x74 as I already have those.
Heym SR20
My advice would be to stick with a rimmed Rifle cartridge if you can. Yes plenty do use Rimless, but they can be a bit fiddly to extract cartridge especially when you have cold and wet hands and you are trying to do a fast follow up shot. Rimmed cases just fall out with a quick turn of the gun.

Don't discount the 7x65R - its the Rimmed version of the 7x64, which is pretty much identical ballistically to the 280 remington which of course will do pretty much anything the 30-06 will.

You three main types to look at.

1) Older Suhl, German and Ferlach, Austrian built guns. Like old English shotguns, these were all quite similar and often beautifully made with Scopes on Claw mounts. Merkel were probably the largest maker, but plenty of others built them as well. Generally they shoot very well, and more than enough for most deer type animals. I have a Ferlach made 16/ 7x65R and I took a Red Stag on Saturday at 200 yards. Holts Auction, New England Custom Guns, eGun.de and Guns International all worth following.

2) Newer Valment, Tikka and Now Marouchi 512, 612, Finnclassic - orginally made in Finland, now in Italy, although not sure if still made. Very good solid guns although not as refined as above.

BRNO did something very similar and good robust guns.

And most of the Italian Shotgun makers - eg Fabarm, Beretta, Rizzini all do build double rifles and combination guns on pretty much shotgun actions. And are priced pretty keenly. How good they are - don't know

3) Blaser, Merkel, Kreighoff, Heym all do a modern BBF. These have decocking safeties, free floating barrels and come in a range of calibres and grades. I spent quite a bit of time looking at them all at Jagd & Hund show in 2018. Not a lot to choose between, but I think I prefer the Heym. I played with a Blaser BD14 last year and watched a friend take a Marmot with its 222 barrel at 300 metres. My one comment is that most handle very much a like a rifle with the balance well forward - they are a rifle first and foremost with an attached shotgun barrel for stationary shots.

The older Ferlach Combinations tended to be 16 bore and handle like fine game guns. With mine I have shot phaesant, woodcock and duck (and missed a couple of red grouse) but have never felt handicapped by it. I would think doing the same with one of the more modern Blaser's would not be as easy.
TomP
Savage 24 includes 30-30 over 12-gauge, maybe over 20 gauge as well.
My 24V was 223/20 gauge, was rebored 6mm to make 6x45mm/20 gauge.
I wonder what other rimmed 30-caliber would be a possibility for a rechambered model 24.
Maybe a 30-40 Krag?

Our country, right or wrong. When right, to be kept right, when wrong to be put right.

Vol717
The Italian maker FAIR sells several combo guns in calibers you could use. In 12 and 20 GA. Prices around $2500. The importer is in Texas. I recently took delivery of a 28 Ga SxS with ejectors, double triggers and left hand wood from them. It weighs 5lb 4 oz. Took 10 weeks to deliver.

Vol717
Another good combo is the Blaser B97. It is fairly light, but the stock is bulky. it can be ordered in several calibers. I have a 12gaX 7X65R with an extra set of 9.3X74R double barrels.

Dale
Vol717: Do you know the name of the importer for FAIR? I have not had any luck doing a search online. Thanks.

Dale
Tpr.1919
I have and would recommend a 12x12x9.3x74R drilling. Of all the guns I hunt with it is one of my favorites. My gun is Sauer made in the 40's which was the civilian version of the Luftwaffe drilling issued to the pilots in the Africa Corp. The beauty of this gun is you are prepared for anything that comes along on a hunt. My gun is not set up for a scope but the newer J.P.Sauer drilling in that caliber can be had with scope mounting systems. I had a Model 3000 a few years ago in 12x12x30-06 with claw mounted scope. I just like the extra power of the 9.3x74R and the rimmed case in the drilling.
Russ Gould
valmet 412 Finland discontinued about 20 years ago
finnclassic 512, same mechanicals, different cosmetics, several grades mfg in Italy by Marocchi discontinued about 8 years ago
finnclassic 612, new mechanicals, two basic grades, much lighter gun, only made for around 5 years now discontinued as well

these are all "system" guns that were offered with 12/12, 12/rifle, or rifle/rifle barrel sets.

I have a few of each left but that's the end of the road. I am not selling any loose barrels sets, only as multi-barrel ensembles.

eny
When you say " multiple -barrel ensambles " do you mean on must buy a rifle with more than just a 12/rifle set of barels?

You can PM me with wat is available if you want. I might be interested in anything 12/ 0-6 or bigger on rifle but that is all
Vol717
The Italian Firearms group sells FAIR, Pedersoli and Sabatti. Here is their contact info:
ITALIAN FIREARMS GROUP

Big Wonderful Wyoming
I am probably moving back to Germany, let me know what you are looking for.

Blaser, Steyr, Heym, Krieghoff, Merkel are still making modern version of the Bockbuchsflinte, if your budget is under $7500 that is where I would look.

If your budget is bigger I would fly to Ferlach and walk around town and talk to everyone and see who suits you.
carpetman1
I had a Savage 24V which I gave to my son in law. The 24V is .222 and 20 gauge. I put a 1x-4x Leupold on it and with the .222 dead on, the shotgun was off, if I remember correctly would shoot low. I don't know if all combos have that regulating problem or not.
Grenadier
I have owned and used several. The various versions of the Savage 24 are useful if you are looking for low prices and basic utility. I do not like the barrel selector. It is crude, awkward to operate, and located on/in the hammer. But since one generally goes afield with the intention of using either the shotgun or the rifle the selector, once set, can be ignored. Remember, too, the Savage guns are hammer guns. They are great for a knock-about utility gun. I have had them in 22LR/20ga and in 30-30/12ga configurations. I shot many rabbits and doves with the 20ga. The 12ga only saw use on the range. Likewise, the 22LR was used on jacks and cottontails but the 30-30 was only used at the range. The shotgun barrels are too short for good shotgunning and they deliver a mean kick because of their light weight and the stock configuration.

I had a Greifelt 7x57mm over 16ga. It was nice enough to look at. But after shooting it a bit I decided I didn't like the feel of the German stock. Also, 16ga has become a sort of neither here nor there shotgun gauge and ammunition is difficult to find on the shelf at most gun stores.

I've owned three of the old Winchester 101 combinations. I really like those. They were sold as Winchester 101 XTR, Grand European, and a couple of other names. I've owned them in 7x57/12ga, 7x65R/12ga, and 30-06/12ga. I liked the 7x65R/12ga version the best. I regret selling it off toward some shiny new thing that seemed worth it at the time. I used the 7x65R to take the largest and oldest Blacktail I've ever shot, a 5x6 pointer with a very gnarly pair of antlers. It also killed some coyotes and a bobcat. I used the 12ga barrels on these guns to shoot pheasants, doves, quail, and band-tailed pigeons. They come with EAW-type swing mounts and rings. The mounts alone would cost over $500 if you bought them separate, the rings another couple of hundred. The stocks are hefty but not too much so, well made, well checkered, and well finished. The actions are smooth, the safeties smooth operating and positive, and the metal is nicely finished. The rimless 30-06 functions just fine in these guns. I gave the 30-06 away. I also had one that was a 7x57 O/U double rifle that I could never find a regulation load for. That's a common problem with O/U double rifles. But that's not an issue with a combination gun. If I were to buy another one it would be in 7x65R/12ga. They are not difficult to find in near new condition with factory case and choke tubes. Offering prices vary ridiculously, and with no rational reason, from around $2800 to $6000. If you are willing to shop around you can get a nice one for $3000 or less. They are excellent guns at those prices.

I've handled the Valmet/Tikka combinations but I didn't like the feel. I also figured that if the separated barrels were easy to adjust they must also be just as easy to bump or knock out of adjustment. They never appealed to me. The same goes for the weird folding CZs.

If you are willing to spend thousands more there are some really well-made guns out there, including sets with shotgun/shotgun, shotgun/rifle, and rifle/rifle barrels. But there's not much in the sub $3000 market. Whatever you do, don't buy an old European beater in an obscure caliber just because it's cheap.

). But I imagine they would feel lopsided. A small, thick-walled rifle barrel and a thin-walled shotgun barrel balance well and hold nicely in the O/U configuration. Also, with an O/U the scope is centered over the rifle bore. You can't do that with a SxS. I believe an O/U is the way to go for a combination gun.

Hasher
Another vote here for the Valmet 412.

Mine are all double rifles but they work well and Cary easily in the field for me.

quote:
Originally posted by crshelton:
Savage made some interesting combination guns, so you might look there. Here is a pic of my Savage .22 Hornet over 12 ga turkey gun taken on a New Mexico prairie dog shoot.

I think some were made with 30-30 rifle barrels.