The Accurate Reloading Forums
Scope rings for a BRNO mod 21H
This topic can be found at:
http://forums.accuratereloading.com/eve/forums/a/tpc/f/3221043/m/608107354
Mickey1
Scope rings for a BRNO mod 21H
I just bought a 21H and need rings. Should I look for the BRNO rings or is there something else that works as good or better.
<JOHAN>
Mikey,
I like the talley as "factory offer". Tom Burgess makes great rings for Brno

Cheers
/JOHAN
1894mk2
Talley - works very well on my ZG.
Monastery-Forester
If you want to spend some money more, EAW has a new detachable mount for the BRNO. I have mounted it on my "new" 8x60S and it works fine!
But sure, the american mounts are much cheaper!
ErikD

quote:
Originally posted by Monastery-Forester:
If you want to spend some money more, EAW has a new detachable mount for the BRNO. I have mounted it on my "new" 8x60S and it works fine!
But sure, the american mounts are much cheaper!

Do you have a picture of these EAW mounts you could show us?
jjs
What type of scopes are you guys using with the Talleys?

This has been discussed several times on these boards. Brno 21/22s require high scope bases/rings for their bolt handles to clear most eyepieces:

1894mk2
Talley only do mediums which is a ring height of .4"
KurtC
The Warne high rings work nicely. Also, there are period scopes that have smaller ocular pieces. Weavers, Leupold M7's, etc. The current Burris short-mag and the Leupold Ultralight have smaller eyepieces as well.
Savage99
The bolt handles on some of them were cut. Compare yours to the two pictures. If your bolt is inletted into the stock like mine then medium rings may clear.

Monastery-Forester
Here a photo of the BRNO with a new EAW-quick detachable mount:

Savage99
How much clearance is there between the bolt and eyepiece?

Is the bolt handle inletted into the stock?

Chisana
I put a set of Talleys on my 21H and was very pleased until I tried to cycle the bolt. Replaced them with a set of Warne high rings and they work fine. With the amount of drop the 21 stock has low rings would allow for a much better sight picture if they would allow the bolt handle to clear the scope.

NoelC
I had just got a set of Talley QD's for both my 21H's, and as mentioned the bolt handle hits the zoom ring and the bell.
I called Talley and the Gentleman said he only carries one height for the Brno/CZ rifles.

I am thinking of going with the Warnes now, but after seeing that pic of them above I may just get another set of factory CZ rings. They clear my Leupold 2.5-8x36 with the Butler creek covers perfectly.
Only downside is they are fixed. I always have a pack with me so an Allen wrench can fit easily in my bag for the next to never chance the scope has to be removed.
TC1
Monastery-Forester, Very nice!

JJS, You need to look into a set of these!

I've got an old set of Warnes low mounts on mine, but you have to fit the rifle to the rings 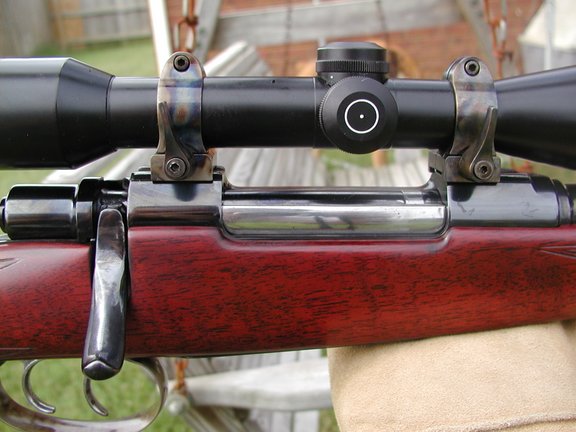 Well, other than that Mrs. Lincoln, how was the play?

.366torque
Very nice Monastery Forester! That would be the "swing out model", no?
Monastery-Forester
It is the "Hebelschwenkmontage" from EAW. Perhaps a bit high and not really cheap - but we europeans have no cheap mounts.
Last week I got a very nice model 22h in 7x57 with an old one piece mount and an old 9x42 (26mm) scope. I wanted to change this scope to a Leupold 3-9x42, but the rings are too wide. No I`m looking for a new, low cost mount, what would you say?
Monastery-Forester

The 8x57 I just got is almost minty but doesn't wear optics yet so it doesn't fit this thread just yet. :-)
Monastery-Forester
Noel, the factory CZ mount is okay? I think, that it is much easier to get a CZ mount in Germany than an american mount.

You can get very good mounts from EAW for BrnoÂ´s, but they are very expensive, the simple 250 Euros and the detachable (Hebelschwenkmontage) nearby 350 Euros. I don`tknow the price of the CZmount, but I`m sure, that it is much cheaper!
NoelC
Yes, I have the factory CZ rings on the 7x57 pictured. They are readily available in Canada for about 40 Euros (my guess) or about $90 CDN.
I looked at the EAW's before the Talleys and I near fainted at the price. A bit too much for this kid.

Do the EAW's quick detach from the whole reciever or do they leave the bases behind?

Only downfall to them is they aren't quick detach. The chance of actually needing QD is pretty rare but it would be nice to be set up that way.

Thanks,
Noel
Monastery-Forester
I just ordered a set of Leupold mounts for CZ 550, I hope it will fit the old Brno!
NoelC
Hey Mickey,

For what it's worth, I measured up my CZ rings and they are a whopping .700" high! These are the ones pictured above and they clear the Leupold scope and Butler caps perfectly.

Hope this helps,
Noel
Woodjack
these look a neat setup: