I have not even kept up with all the new names and features of these newer bows.

My friend is trying to get me to buy his Heli-M and it got me wondering if anyone on here has upgraded their bow or if they are still shooting the same one they have for years.
Heym 450/400
I usually upgrade every 3-4 years...this is long enough to get proficient and still keep up with the latest technological advances. I was shooting a Hoyt Carbon Element and just upgraded to a Carbon Defiant.
Hunting For Adventure
Currently shooting a Halon. I like it.


Biebs
Bowtech RPM 360
BenKK
Black Widow recurve.
Muttly
Wes Wallace long bow..
hivelosity
I still use my Indian purchased in the 1980's.
Up grade this year to a crossbow. arthritis in both my shouldes makes it hard to pull back a bow.
DTala
the same 1969 model Bear Takedown recurve I've used for the last 48 years.

I'll be shooting my Chill R again this Summer and Fall

JCHB
Bowtech Invasion 80lbs. Took a beautiful 30 inch Nyala in the Hluhluwe area (Zululand) a couple of months ago. He didn't know it wasn't the latest 2017 model!!!

JCHB
df06
The Drenalin is one of the best bows ever made. I had two Drenalin LD bows. My sone has the standard Drenalin. I dropped about $1000 on a new bow to replace the Drenalin. It also is a great but, but I gained very little if anything for $1000.

dustoffer
Just moved my Mathews Outback and DXT and replaced them with two Elites---an Answer and a Hunter. Just like the draw cycle and firm back wall so much better.


An old pilot, not a bold pilot, aka "the pig murdering fool"

Hogbreath
I'm still shooting my Mathews Switchback. Damned accurate, shoots my chosen arrows at 304 fps and has killed everything I have shot at.

Gerhard.Delport
Bowtech Destroyer and the RPM


Cougarz
Same one for the past ten years or so: DAS Dallaa.


An old pilot, not a bold pilot, aka "the pig murdering fool"

Abbispa
Upgraded to a Mathews Chill X this year. I love it because of how well the longer bow fits me. I like you had been shooing the same bow for ten years. The new top tier bows draw amazingly smooth.
loud-n-boomer
My primary hunting bow is the Bear Firststrike XLR I bought about 20 years ago, though I did upgrade the arrow rest a couple of years ago. It still works fine, as the doe I shot a couple of weeks ago can attest to. I also shoot a 35 year old Bear recurve and a Turkish horse bow for fun. I used to shoot a longbow, but it broke and I have yet to replace it.


One morning I shot an elephant in my pajamas. How he got into my pajamas I'll never know. - Groucho Marx

Bill/Oregon
Thinking a crossbow from Excalibur to get back in the game. Right shoulder's about worn out.

quote:
Originally posted by dustoffer:
Just moved my Mathews Outback and DXT and replaced them with two Elites---an Answer and a Hunter. Just like the draw cycle and firm back wall so much better.

Both those Elite's have the best cam back walls in the industry.
Charlie P.(NY)
Currently shooting a Red Wing Hunter (Pre-Head) . 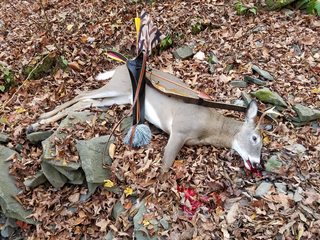 Ive been thinking about upgrading to a Matthews Halon 32.. but havent decided yet..

The Parker still gets the job done just fine.. My wife got a new Matthews Avail a few months ago though and jealousy has started to take hold.. her Avail is one seriously nice, quiet, and efficient bow..
ar corey
2011 K&K Vindicator
npd345
73 lb Botech rpm360 and a 89lb Botech 340 (custom limbs)
cooperjd
ndp, did you get barnsdale to make 89# limbs??

he would only send me 80s, and that took some persuading.
npd345
Yep they are Barnsdale.

You never know what they are going to actual be until you put them on the bow.

I got one set that was supposed to bring the bow up to 84 and I actually dropped one pound from the old stock limbs!


Next set we thought would get me to 85, my goal and they came in at 89lbs! They are a very smooth limb and very well made.
cooperjd
yeah i've been happy with them. with my first set for my D350 at around 79lbs, a tiny splinter developed along one edge. I sent dave a picture and he sent me new limbs immediately. those are right at 80# after i twisted the cables a bit.

he told me to break the splinter, sand it, and apply some super glue and rock on, so i put that set on my D340. they are right around 75#. I did the limb swap a couple weeks ago on that bow and was bare shaft tuned in about 5 minutes. they are great!
ar corey
My most memorable bowhunt was 7 years ago and I had 2 tags. Regular and antlerless.

I was shooting a Hoyt Carbon Element and shot a doe broadside at 20 yards. Then a buck walked up. 70 pounds at 330 IBO resulted in a complete pass through on both deer using the Exodus broadhead.

The only thing I didn't like about the Hoyt Element was the back wall. If you creeped forward any amount the bow would start letting down immediately. The Elite Answer and Hunter have to be pushed forward to let down.
ar corey
https://m.youtube.com/watch?v=TfpL8v8lmLQ
Icafrica
Bowtech Prodigy.
BenKK
Just got a real sweetheart... 70# Javaman Elkheart.
Charlie P.(NY)
Nice. Gregg is as nice a guy as you could ask for and does beautiful work. He also produced the Shrew bows for a time, but I don't know if that is still the case.
BenKK
Gregg runs his own custom bow business these days.
low saddle
Don’t update as much as I’d like I currently have a Hoyt carbon spyder and my last compound was a Hoyt ultramag, I should shoot them a little more then I might be able to justify an update , time will see I spose